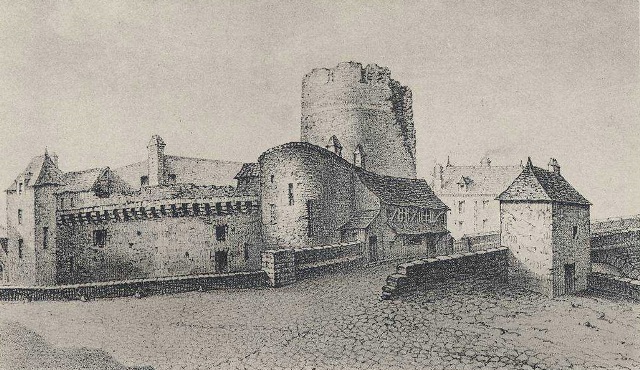 Location: Nantes, in the Loire-Atlantique departement of France (Pays de la Loire Region).
Built: 14th century.
Condition: Ruins.
Ownership / Access: Private property.
Notes: Château de Pirmil, also said Fortress Pirmil, Tower Pirmil and formerly Chastel said Bouchart is an ancient castle now disappeared built in Nantes (Nantes Sud current quarter) in 1364 or 1365 by Admiral Nicolas Bouchart on behalf of Duke John IV. He was defending the southern end of Pirmil bridge, one of the works of the only "bridge line" which, at the time, made it easy to cross the Loire between Nantes and the left bank of the river. This "line bridges" was also the last crossing downstream of the Loire estuary before. The castle is shaped like an irregular quadrilateral of three towers connected by curtain walls topped by a walkway to niches and battlements, a main building and a large courtyard. The north side, whose foot is immersed directly in the Loire welcomes tower also called Duke Tower Loire. It is the largest castle tower, it is cylindrical and is built directly on the head of the bridge, so as to perfectly control access. The tower of the Duke is connected to the tower called "de Sevre" by a curtain pierced with a postern opening onto the river. This tower is located to the west and overlooks the River Sevre. The western curtain wall was further protected by an outwork drilled five large niches. It is on the southern front, facing the ground, which is the main entrance of the castle: a large building forming gatehouse. On the ground floor of this building, there was the body-of-guard, kitchens and prisons. On the first floor were the captain of the apartments, and the upper floors, housing guards. The walls of the castle is closed to the east by the tower called "Admiral", which joins the main tower by a curtain. The entire enclosure is protected by wide moats.