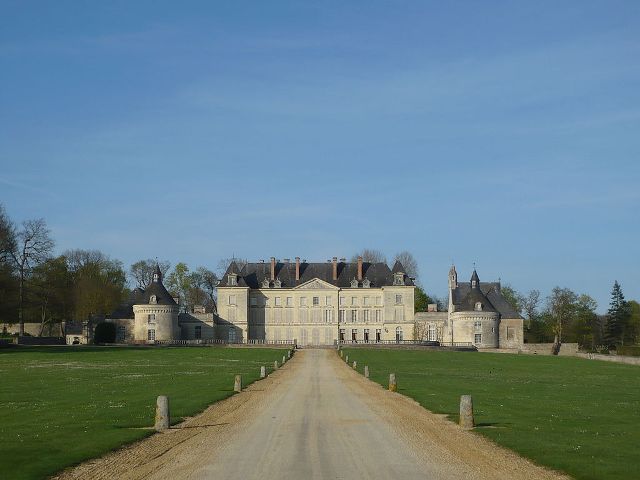 Location: Mazé, in the Maine-et-Loire departement of France (Pays de la Loire Region).
Built: 18th century.
Condition: In good condition.
Ownership / Access: Privately owned.
ISMH Reference Number: PA00109179
Notes: Château de Montgeoffroy is a castle of the eighteenth century located Maze (Maine-et-Loire). In 1676 Erasmus Contades, from a gentry family located in Anjou since the early seventeenth century, acquired the land Montgeoffroy. In 1772 Louis Georges Erasmus Contades, born in 1704, Marshal since 1758 and Governor of Alsace in 1762, decided to rebuild the castle in order to retire there; he also possessed Anjou houses in localities Raguin, Montrevault, La Roche-Thibault. It uses the Parisian architect Jean-Benoît Vincent Barré, who was forced to partner with a local architect, Simier. The marshal is away from the office by Anjou in Versailles and Strasbourg, stayed there a few weeks in the summer. The work, which lasted four years, were mainly led by his son, the Marquis de Contades - who settled there from 1772 - his daughter, Julie Constantin Marans, his former mistress, Helen Hérault, and the beautiful girl- latter, Marie-Marguerite Magon de La Lande. The castle, its outbuildings, the chapel and the two entrance pavilions, the esplanade, the moat and the courtyard south of the castle and the facades and roofs of the two garden pavilions were classified as Historical Monuments by decree of 8 October 1984. The telefilm Marcel Bluwal The Game of Love and Chance was shot entirely in 1966 in the park and various parts of the castle.

How To Get To Château de Montgeoffroy (Map):