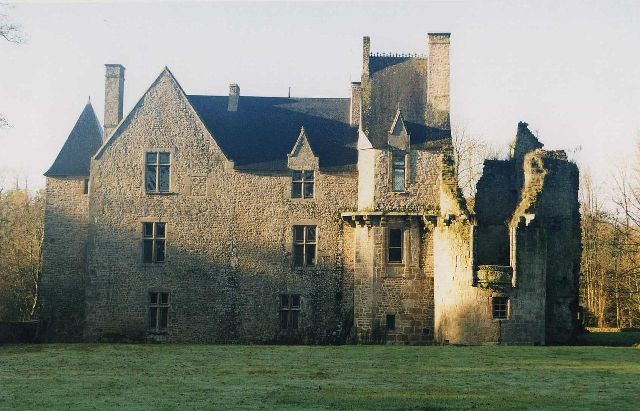 Location: Landivy, in the Mayenne departement of France (Pays de la Loire Region).
Built: 15th-16th century.
Condition: In good condition.
Ownership / Access: Private property.
ISMH Reference Number: PA00109521
Notes: Château de Mausson is a castle located south of the town of Landivy Mayenne. It was built in the fifteenth and sixteenth centuries on the ruins of an older castle, razed during the Hundred Years War. The manorial estate was subsequently owned by the families of Landivy of Scépeaux, Romilly and Alba until the French Revolution. Composed of a main building and various other parts are now in ruins, was a historical monument by decree of February 3, 1912. Its name (Mausson) mean "bad design, bad luck." Castle Park (eighteenth century) is identified by the general inventory of cultural heritage. To the east of the park, a water level of 300 meters long and 50 meters wide extending to the hamlets of Bay de Fer and Lower Maulardière. To the south, the park merges with that of the house of the Oblates of Pontmain.