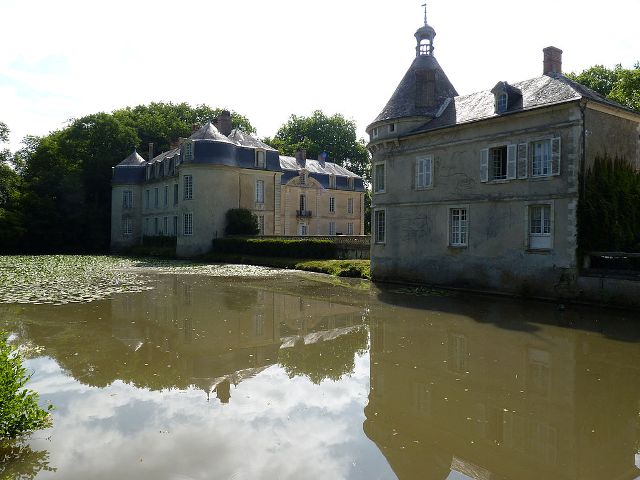 Location: Malicorne-sur-Sarthe, in the Sarthe departement of France (Pays de la Loire Region).
Built: 12th-18th century.
Condition: In good condition.
Ownership / Access: Privately owned.
ISMH Reference Number: PA00109792
Notes: Château de Malicorne-sur-Sarthe is a castle built in the eighteenth century in the municipality of Malicorne-sur-Sarthe in the department of Sarthe. It is partly registered as historical monuments. The old fortress of Malicorne, founded in the twelfth century role was to defend the gates of Maine. In 1368, the castle fell to Robert Knowles, and is then taken to the English by Ambroise de Lore in 1425. From the seventeenth century, the Castle of Malicorne becomes the property of Beaumanoir-Lavardin that make it the center of a life social brilliant. The castle is particularly popular at that time by Madame de Sevigne. The present castle was built in the late eighteenth century on the ruins of the old medieval building. The facades and roofs of the castle and the entrance pavilion, all rooms on the ground floor of the castle, entrance gate and park are the subject of a registration as a historic monument since the April 24, 1989.

How To Get To Château de Malicorne-sur-Sarthe (Map):