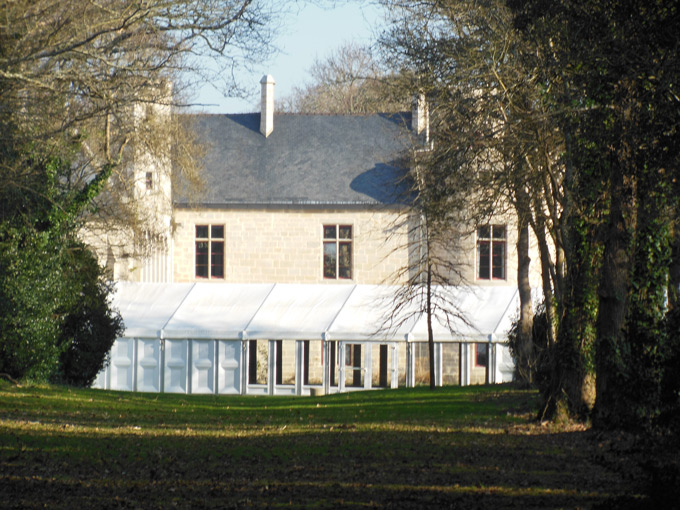 Location: La Turballe, in the Loire-Atlantique departement of France (Pays de la Loire Region).
Built: --.
Condition: --.
Ownership / Access: Private property.
Notes: The castle of Lauvergnac is a manor house located in the town of La Turballe, in the French department of Loire-Atlantique.Lauvergnac is the name of a castle and its seigneury, attested from 1395, with right of low justice and average justice. The family of Lauvergnac seems to have been allied in the fifteenth century to that of the Le Pennec. Pierre Le Pennec was ennobled on 15 August 1433 by Duke Jean V of Brittany for services rendered during the siege of Pouancé in 1432. The "lodging of Lauvergnac" entered its patrimony in 1463 and enlarged the seigniory by redemption of land to nearby. In 1673, the estate was sold to Pierre de la Haye, lord of Silz. In 1749, Marie Vincente de la Haye yielded to Jacques Anne de la Bourdonnaye, lord of Boishullin. His son, Anne Francois Augustin de La Bourdonnaye, was born in Guérande in 1747 and grew up in Lauvergnac. The castle passes by marriage in the family Le Pourceau de Mondoret in 1773, then in 1855 in the family of Geloes d'Elsloo. The latter carries out renovation work in a medieval style: construction of the glazed gallery overlooking the park, displacement and elevation of one of the two crenellated towers which was previously linked to the surrounding wall, false door, gargoyles , Reconstruction of the private chapel Sainte-Barbe with its stained-glass windows and its slender arrow. In the middle of the nineteenth century, the estate extends over 300 ha and includes four farms, three mills and one hundred hectares of pastures on the cliffs. The Geloes family of Elsoo retains ownership until 2005.