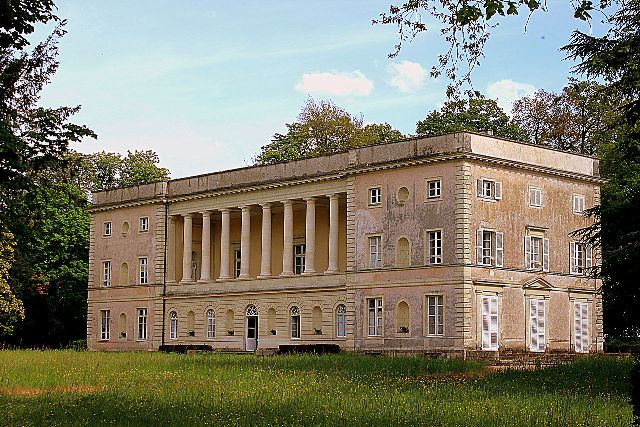 Location: Vallet, in the Loire-Atlantique departement of France (Pays de la Loire Region).
Built: 1823-1835.
Condition: In good condition.
Ownership / Access: Private property.
Notes: Château de la Noë Bel-Air is a castle located in Vallet, in the Pays de la Loire, France. The castle is located in the town of Vallet, in the department of Loire-Atlantique. It is close to the D37, leading to Landreau. The castle is a rectangular building whose front facade is oriented north-northwest. This facade is embellished with a high columned loggia of two floors. It is built in the middle of a landscaped park, which is also classified. This park is surrounded by a wall, low-rise, provided small round towers at several angles. In the western part of the park is a landscaped pond, in the middle of which is a small island, connected to the park by a wooden bridge railing scroll grid and ironwork. Next to the pond there is a blank carved by Grootaers in 1846. In the eastern part of the park is a monument to the memory Royalists shot in 1793. The park is at the time, rallying point for the army to Kleber Non-away camps. The Italianate style, mixed with the Empire style, strongly inspired by François-Frédéric Lemot, the main architect, Louis-Joseph Chagniau, being one of his students. The second architect is Bourgeret.

How To Get To Château de la Noë Bel-Air (Map):