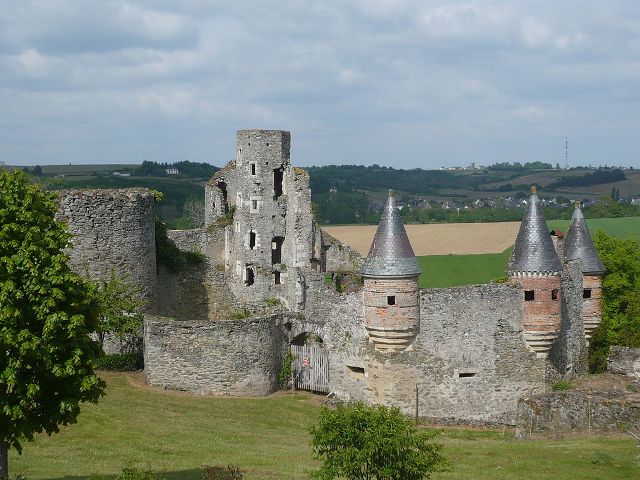 Location: Saint-Aubin-de-Luigné, in the Maine-et-Loire departement of France (Pays de la Loire Region).
Built: 13th-16th century.
Condition: In good condition.
Ownership / Access: Privately owned.
ISMH Reference Number: PA00109251
Notes: Château de la Haute-Guerche is a medieval fortress now in ruins, located on the territory of the French town of Saint-Aubin-de-Luigné in Maine-et-Loire. If it is possible that the site was originally a feudal mound, it is attested from the thirteenth century with the construction of a square bastion 40 meters wide. In the fifteenth century, the manor, which previously belonged to the family of Savonnière goes to the Lords of the Jumellière; it was she who built the majority of the fortress. The castle was burned by infernal columns in 1793, by order of the mayor of Chalonnes. Four years later, he was sold as national property; it is then used as a stone quarry and transformed into farm. The restoration of the chapel will make him receive the first prize of Masterpieces in Danger in 1970. The site consists of two courses: a high and a low. The book is pentagonal, and measure 12 meters wide to 18 deep. The residential house is in the high court. A stair tower can reach the story of two residential wings. there are a series of facing windows with their coussièges Layon, and latrines and fireplaces. The high court was defended by four towers, two of which remain. The outer defenses of the curtains were battered by a series of gunboats, artillery forming a boulevard, reinforced by a caponier. A walkway provides access to three turrets with more ostentatious aim defensive. These are made of brick, unlike the rest of the building, built in shale rubble.

How To Get To Château de la Haute-Guerche (Map):