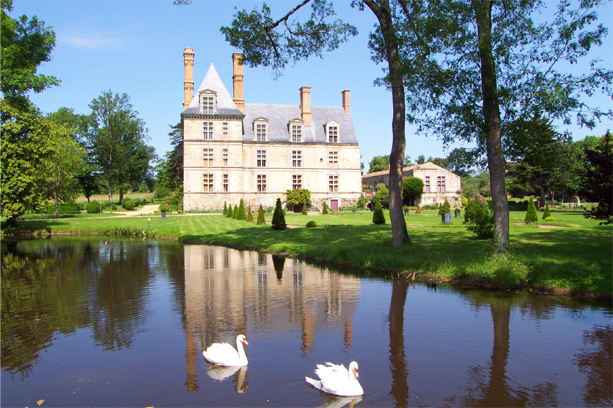 Location: Avrillé, in the Vendée departement of France (Pays de la Loire Region).
Built: 16th century.
Condition: In good condition.
Ownership / Access: Privately owned.
ISMH Reference Number: PA00110021
Notes: Château de la Guignardière is located Avrillé Castle in the department of Vendée, in the region Pays de la Loire. The building occupies a central place in the recreation park called "The Castle of the Raiders." Castle Guignardière was built around 1555 in Avrillé for Jean Girard, baker Henri II. The architect designs a grandiose plan, rigorous, severe, abandoning the traditional vocabulary of Renaissance and already announcing the beauties of classicism. In 1563, the owner is murdered and the huge abandoned building. The master masons disperse in the greater region, influencing the buildings for decades. In the eighteenth century, the great pond is dug and paved. Count Sylvestre Chaffault of participating in the reconstruction of the castle. The window topped with pilasters with Ionic capitals and topped with a pediment decorated with his coat of arms dates from this period (1773). But the count, royalist, sought after the arrest of Louis XVI should emigrate. On his return from exile, the Republicans have plundered the castle, toiled away his arms and shot her children. In the early nineteenth century, the Marquis de Saint-Denis, passionate about agriculture develops the field, transforms the English garden and plant exotic trees: magnolias grown-flora, bald cypress, zelkova, redwood, etc. His successor Henry Luce Tremont also considering complete the castle but is content to move the porch at home from the center of the facade. It is open from April to September visit. Under its slate roofs with steep slopes, it has three spans of mullioned windows and two cross of granite, widely used for frames, cords, corbels and corner wall ties. The facades and roofs of the castle and building easements are classified historic monument by decree of December 28, 1978.1 Thus inside, stairs and chimneys of the lounge, the billiard room, the dining room on the ground floor and a first floor room. The castle is now home to many activities, including golf games, puzzles, called "The Castle of the Raiders.".

How To Get To Château de la Guignardière (Map):