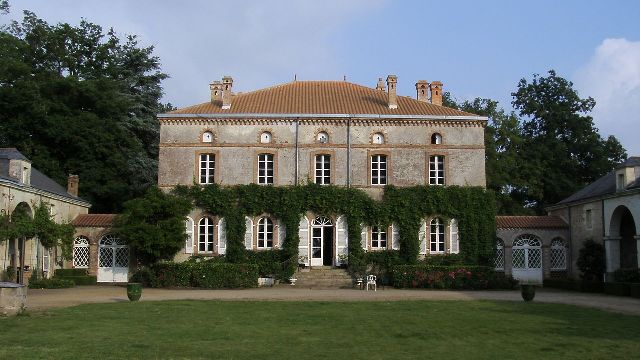 Location: Gorges, in the Loire-Atlantique departement of France (Pays de la Loire Region).
Built: 1800-1835.
Condition: In good condition.
Ownership / Access: Privately owned.
Notes: Château de l'Oiselinière is a winery located in the town of Gorges. Ownership of the Oiselinière was before the French Revolution a lordship. It is reported in "Acts" of already chartrier since 1335 and it covered the municipalities of Gorges and Clisson, and feudal lords fell Clisson and Pallet. During 643 years, the lordship only changes four times owners: this is the Meignen Maurice who is the first known owner and in 1460, one of his descendants by marriage, Claude Grézeau. His family sold the lordship of Oiselinière Jean Goulet Trough of Nantes in 1613. This is followed by the acquisition of Louis Labourdonnaye in 1658. Then in 1767, sales of the lordship to the ancestors of the family Aulanier. In 2006, Georges Verdier and his family become purchasers and become owners of the Castle of Oiselinière. At Oiselinière, vines have been cultivated since time immemorial. It also maintains leases on parchment of 1337, 1471, 1505, 1546. But mainly we find a parchment dated 1635 who first mentions the name of Muscadet. This is the first lease known to date and reads as follows: Jean Goulet Trough Nantes locker several individuals Parish Gorges room 78 boisselées called "The Great Gats" dependent on the land of Oiselinière for planting in white Muscadet vineyards. During the Second World War, the property was a hotbed of resistance, Aulanier family by paying a strong tribe. General Louis-Alexandre Audibert (1874 -1955), resistant and deputy of the Lower Loire, retired to the Chateau after his political career and spent the last nine years and life.

How To Get To Château de l'Oiselinière (Map):