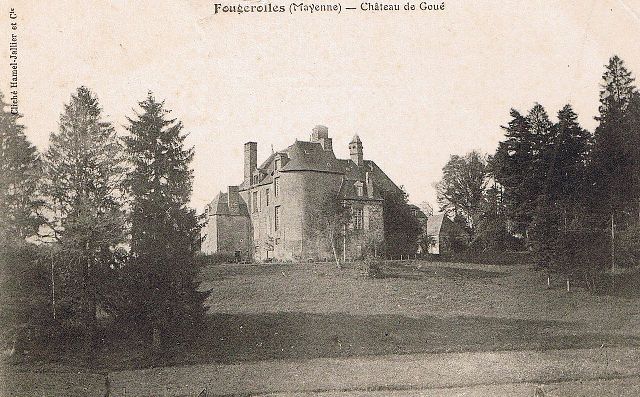 Location: Fougerolles-du-Plessis, in the Mayenne departement of France (Pays de la Loire Region).
Built: 16th-17th century.
Condition: In good condition.
Ownership / Access: Privately owned.
ISMH Reference Number: PA00109509
Notes: Château de Goué is located in Fougerolles-du-Plessis in the department of Mayenne. A stately home was built Goué from the beginning of the fourteenth century. But the first castle there remains only the large round tower and adjoining walls. It was completely rebuilt in 1519 by Thomas Goué and enlarged in 1650. The castle, according to the plans, looks like a sitting lion. Its facade is of Louis XIII style. Vicissitudes: the castle was looted several times. In the month of February 1517 Patrice Goué obtained a monitory against the criminals who had ransacked his castle. In April 1615 he was sacked by the soldiers of the regiment Nedain Knight. On 18 July 1794, the castle is under attack nati.onaux guards. It is registered under the Historic Monuments November 13, 1973. A ceiling and interior decorations are classified at that date.

How To Get To Château de Goué (Map):