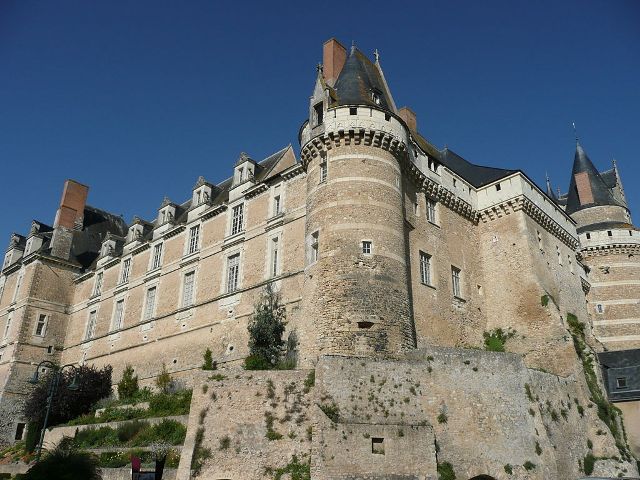 Location: Durtal, in the Maine-et-Loire departement of France (Pays de la Loire Region).
Built: 15th-16th century.
Condition: In good condition.
Ownership / Access: Privately owned.
ISMH Reference Number: PA00109090
Notes: Château de Durtal is a castle located in Durtal, in the department of Maine-et-Loire. It is a historical monument in 1900 (castle) and 1950 (Veron door). The castle is located halfway between Angers and Le Mans. Built on a rocky promontory overlooking the Loire Valley. Hostilities between the counties of Anjou and Maine Fulk pushed Nerra lay the first foundations from 1040 Castle Durtal. Built on a rocky promontory, this feudal fortress was a strategic bulwark to ensure the defense of their land. In the middle of the eleventh century, the son of Geoffrey Martel completed the construction of the castle. The current castle dates from the fifteenth century, after the Hundred Years War. It was built by the family of La Jaille. It is one of the residences of the Marshal of France Francois Scépaux and, a century later, Henri de Schomberg. The castle receives visits from members of the royal family and the court and hosts the King René, Charles IX, Henri II. The proliferation of trade by the Loir in the sixteenth century causes the progressive enrichment of the area and the height of the castle, which marks the beginning of a transformation into a palace where Louis XIII stayed and Catherine de Medici. In the seventeenth century, the Duke of Rochefoucauld castle is one of his many residences. In 1859, the castle is home to the hospital in the city, served by the Sisters of St. Mary of Angers. The transformation mutilates some rooms and some interior decorations. Several artists are attracted by the majesty of the place - the painter Alexis Axilette (1860-1931) native of Durtal - Raoul Dufy friend Axilette - Lucien Jonas (1880-1947) stayed in La Fleche, from 1932, and made several paintings of the castle overlooking the Loir. Joel Baudouin (1931-2013) painter, ceramist, sculptor, is several times the castle. In 2007 the castle was bought by the politician Alain Suguenot and his family.

How To Get To Château de Durtal (Anjou) (Map):