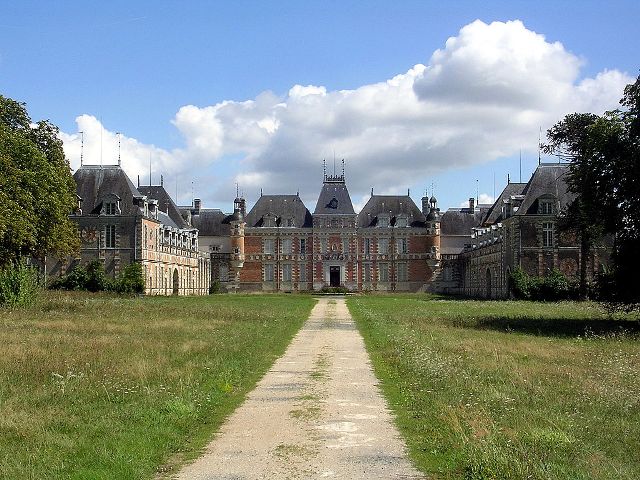 Location: Cellier, in the Loire-Atlantique departement of France (Pays de la Loire Region).
Built: 16th-17th century.
Condition: In good condition.
Ownership / Access: Private property.
ISMH Reference Number: PA00108578
Notes: Château de Clermont built between 1643 and 1649, is located in the town of Cellier, in the French department of Loire-Atlantique. Registered historic monument November 14, 1941, this castle is known to have been the property of the actor Louis de Funes, he was the last residence until the death of the actor in 1983.Clermont Castle occupies the site of the ancient monastery of Mont Clair, destroyed by the Normans in 845. A lordship of that name, probably founded by the Bishop of Nantes at an unknown date, would have as first holder Thébaud Clairmont. She is quoted in 1385 with Richard as Lord of Bourcigné, whose descendants kept the land until 15233. The Chenu, builders (about 1640-1711) The daughter of Christophe BRECEL, Seneschal of Nantes, brought the field in dot Jehan Chenu, "lord of the Endomière, Bois-Garnier and Saint Philbert in Anjou." The current building was built in 1649, following the victory of Rocroy (19 May 1643), where the one who later called the "Grand Condé" and who then bore the title of Duke of Enghien, saved Louis XIV child throne and earned a huge favor. It reflects the enthusiasm of a period full of glory. This family of great military administrators added to his name from this earth. René Chenu, Father (1599 - 1672), Gentleman of the King's Chamber, was long on behalf of the Duke of Montmorency and the Prince of Conde, governor of the strongholds of Oudon and Champtoceaux commanding the course of upstream Loire. His son Hardy (1621 - 1683) was "driver and general visitor fortifications, cities, castles and strong places of Brittany." They were vassals of the princes of Conde, owners of many properties in western France and hardship this case, so strong under the old regime, was coupled with a strong personal friendship. Rene Chenu was the contemporary and ally of Henry II de Bourbon, Prince of Conde. The dates of birth and death of Hardy Chenu coincide more or less with those of the Grand Condé, he was the gentleman of the House. A good tradition affirmed that Chenu, father or son, is in a fight saved the life of his master, who wanted to express his gratitude. In any case, the construction of the castle, whose proportions have something great, testifies princely munificence. The estate was sold in 1711 to Claye, then in 1737 to the Labourdonnaye. During the French Revolution, he fell into the hands of the republican troops. Acquired in 1800 by the Juchault Jamonières who kept it until 1853, he was transferred by Baron Antoine Juchault of Jamonières to Count Lareinty-Tholozan, which sold it in 1861 to Leon Nau Maupassant4 which, despite its namesake, n has no apparent relationship to the writer Guy de Maupassant.