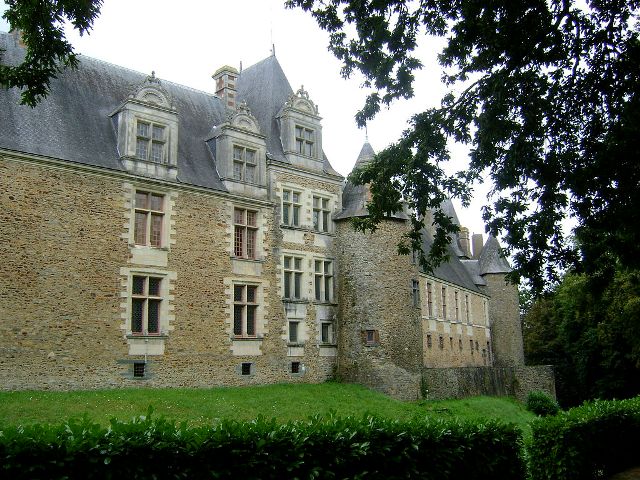 Location: Châteaubriant, in the Loire-Atlantique departement of France (Pays de la Loire Region).
Built: 12th-16th century.
Condition: In good condition.
Ownership / Access: Owned by the Department.
ISMH Reference Number: PA00108582
Notes: Château de Châteaubriant is a medieval fortress heavily reworked in the Renaissance located in Loire-Atlantique, in the town of Chateaubriant. The castle was established in the eleventh century on the Marches of Brittany and, like those of Vitre, Fougeres, Ancenis and Clisson, he was responsible for defending Britain against the kingdom of France. It is also the Breton for the castle of Pouancé, located in Anjou. The castle was remodeled several times during the Middle Ages, and the town of Chateaubriant developed around, surrounding itself with ramparts in the thirteenth century. The whole amounted to a barony in the twelfth century, then goes to the families of Dinan and Montfort-Laval. During the Mad War in the fifteenth century, the castle was taken by the French after a siege. The house and the tower, damaged, are restored. Finally, in the sixteenth century, the castle takes its final appearance with the construction of new homes and a large Renaissance gallery. The barony of Chateaubriant returns to Condé house in the seventeenth century. After the French Revolution, the castle, sold several times, hosts various administrations. The closure of the court in 2009 and the start of the sub-prefectural services possible to envisage a new presentation of the castle to visitors. This castle is on the list of 1034 first French historical monuments in 1840. The protection, however, was removed in 1887. It is again the subject of a classification as historical monuments since July 11, 1921. He also part of a preparatory list for the inclusion of the British march to the UNESCO World Heritage.

How To Get To Château de Châteaubriant (Map):