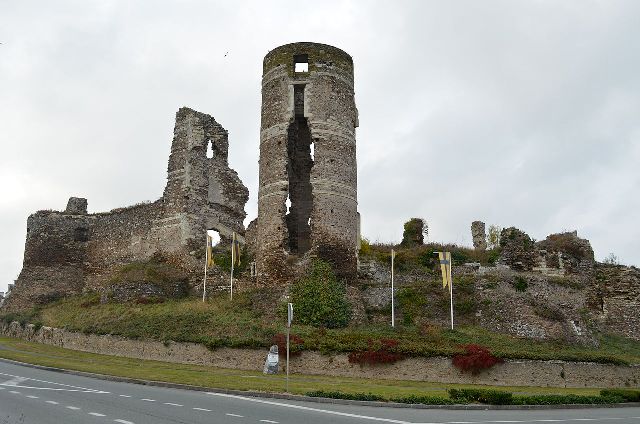 Location: Champtocé-sur-Loire, in the Maine-et-Loire departement of France (Pays de la Loire Region).
Built: 13th-16th century.
Condition: Ruins.
Ownership / Access: Privately owned.
Notes: Château de Champtocé is a medieval castle located in Champtocé-sur-Loire in Anjou, in the department of Maine-et-Loire. He is known for being one of Gilles de Rais places of residence. The popularity of the castle is due to Gilles de Rais (Retz), who was born there around 1405 the union of Mary Craon and Guy de Laval, lord of Retz. In the Middle Ages, the castle was the first stronghold of Anjou on the right bank of the Loire, the first line of defense against the Duchy of Brittany and above all, a major toll. It was not until the thirteenth century fortress Champtocé took its current form. The site is mentioned around the year 1000 under the name of Cantosciaco in the Cartulary of the Trinity of Vendôme. It is possible that the site was in the hands of the counts of Anjou themselves to control river traffic on the Loire. Fulk Nerra enfeoffs are some Orry. Following packages of it, he undercut and entrusts the earth in the early eleventh century to a family of knights who took the name Champtocé, whose first known member is Hugues Champtocé. The site is called castellum to the 1075-1084 years, demonstrating its kind fortified. The feud passed into the hands of Craon family by marriage Tiphaine Champtocé Maurice de Craon to 1100. In 1212, during the conflict between Capetians and Plantagenets, Amauri Craon takes the side of the king of France Philippe Auguste in s 'pledging to hand over the fortress.