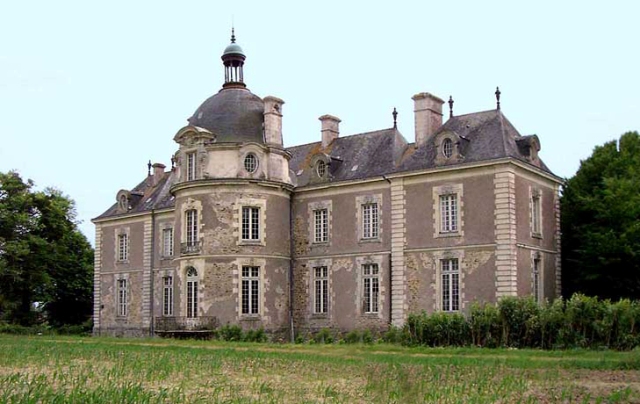 Location: Port-Saint-Père, in the Loire-Atlantique departement of France (Pays de la Loire Region).
Built: 18th century.
Condition: In good condition.
Ownership / Access: Privately owned.
ISMH Reference Number: PA00108778
Notes: Château de Briord is a castle located in Port-Saint-Père, France. The castle is located in the municipality of Port-Saint-Père in the department of Loire-Atlantique. The castle was built in 1770 by Joseph Charette, the site of a medieval building seat of the lordship of Briord which originated in 1225 and was owned by Martin Rezay in 1450. This lordship exercised a right high, medium and low justice in ten parishes between 1437 and the Revolution. It was acquired by Nantes shipowner Dubois-Violette (which already owned the castle Chassay) in 1800 and remained with him and his son until 1833. The castle belongs to the Count de Lautrec, general of King Armies of the Two Sicilies, which builds the tower there in 1860, the central corp of the castle, which will be modified by the following owner. The castle was sold to Jean-Baptiste Etienne, son of small industrial Nantes Jean-Simon Voruz who died there Oct. 27, 1896. The castle is an award for the 1900 World Fair for its interior decoration. The castle is still in the family Etienne, and his descendants are the Say of Nantes sugar. The monument is registered as historical monuments in 1980.