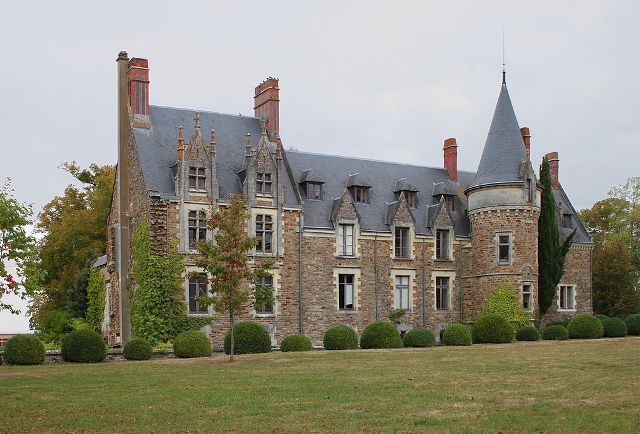 Location: Le Landreau, in the Loire-Atlantique departement of France (Pays de la Loire Region).
Built: 19th century.
Condition: In good condition.
Ownership / Access: Private property.
Notes: Château de Briacé is a castle located at Landreau (Loire-Atlantique), France. The current castle dates from the nineteenth century. The castle is located in the French department of Loire-Atlantique, in the southwest of the town of Landreau on the D55 in the direction of the Chapelle-Heulin, and near the marsh of Goulaine. Briacé Castle is a Renaissance building in ocher freestone and limestone, dating largely from the nineteenth century, although the north gable is older. It is surrounded by wide moat masonry of which only the western and southern parts. It is surrounded by a 7 ha park where several centuries old trees located. Manoir twelfth century, rebuilt in Renaissance style in the fifteenth century. Partially destroyed during the War of Vendee, it was rebuilt in the nineteenth century, including its moat, but the entire western part has not been completed beyond the cellars, where a blind gable with stone projections for liaison with future walls. The park, cellars and common (stables) also date back to the nineteenth century and the general organization corresponds to the principles of the castles of this century (English park with pond and stream traversing the park, vegetable garden surrounded by walls and greenhouses). The property was transferred to the St. Gabriel Brothers to the death of the owner Gilbert Blanchard of receivables in the 1950s to build an agricultural school (following demand from growers and market gardeners Nantes). Subsequently, half the moat north side and is, that of the stone bridge that allowed to connect the castle to a majestic driveway lined with remarkable trees was destroyed, the castle and cease to be on an island. The castle itself, including the interior, has been respected despite its initial use current and dorm rooms and the entrance gates to the pillars monumental and stylized.

How To Get To Château de Briacé (Map):