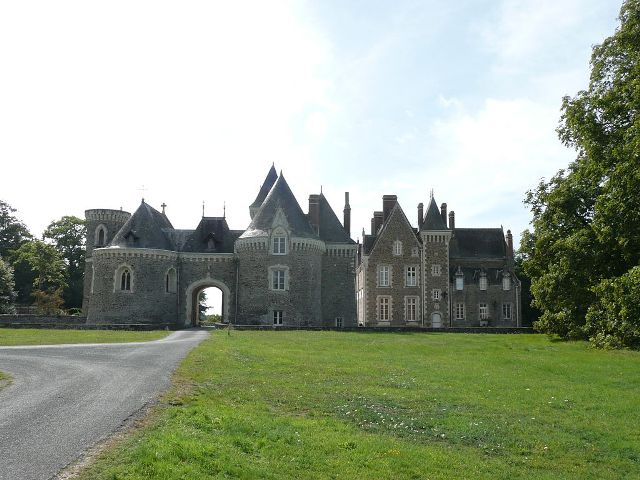 Location: Freigné, in the Maine-et-Loire departement of France (Pays de la Loire Region).
Built: 16th century.
Condition: In good condition.
Ownership / Access: Privately owned.
ISMH Reference Number: PA00125647
Notes: Château de Bourmont is located in the municipality of Freigné in the department of Maine-et-Loire, Loire Valley, France. The La Tour-Landry, then Maille La Tour-Landry held lands Bourmont since the fourteenth century. By the alliance in 1691, Marie-Helene de Maille La Tour-Landry (1670-1752) Marie-Henry, Earl of Ghaisne (1662-1710), it goes to the Ghaisne family Bourmont, which he always belongs. In 1773, Château de Bourmont is the birthplace of Louis-Auguste-Victor, Count de Ghaisnes de Bourmont, author of the capture of Algiers in 1830. Conquest by which it will be made Marshal of France. In 1795, when chouannerie, Viscount Scépaux established his headquarters. It contains the remains of an important defensive military apparatus of the Middle Ages. Building construction runs from the sixteenth century to the north tower at the end of the nineteenth century. Both common and orangery were built beginning in 1702 in the Louis XIV style. The house dates from 1892, built in the Gothic Revival style by Bibard and Lediberder. It is registered (partly) as a historical monuments, by order of 29 January 1993.