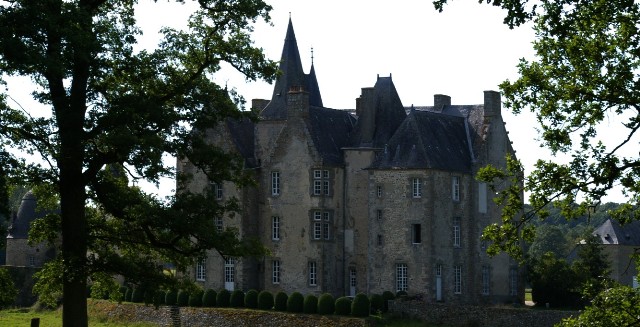 Location: Montourtier, in the Mayenne departement of France (Pays de la Loire Region).
Built: 15th century.
Condition: Ruined.
Ownership / Access: Private property.
Notes: Château de Bourgon (Mayenne) is on the road to Belgeard, town Montourtier. It is a castle of the fifteenth century. In 600 years, the castle was sold twice. It belonged to the Montmorency in the seventeenth century. The main hall and staircase are the fifteenth century with a stone building. The other rooms were added later (except the parlor would be a party of the old castle), and have outstanding woodwork of the eighteenth century. The castle contains very specific parts: a library stocked books of a few hundred years, a chartrier dating back over 600 years which preserves the castle archives, the very special room called "blue cabinet" of the Marquise de sandblasted, wife of Urbain de Montmorency-Laval, a chapel dating from 1528 and a bridge over the former moat, now dried up. Some annexes receive a registration as a historic monument since December 29, 1994, while the castle, the stone bridge and the portal are classified since August 9, 1996 It was bought in 2004 by Mr. and Mrs. Ducatillon, a couple from the northern region of France. The French Heritage Society made a donation in 2009 for the restoration of the castle and the important work of roofing are scheduled for 2010-2012, approved by the Historic House.

How To Get To Château de Bourgon (Map):