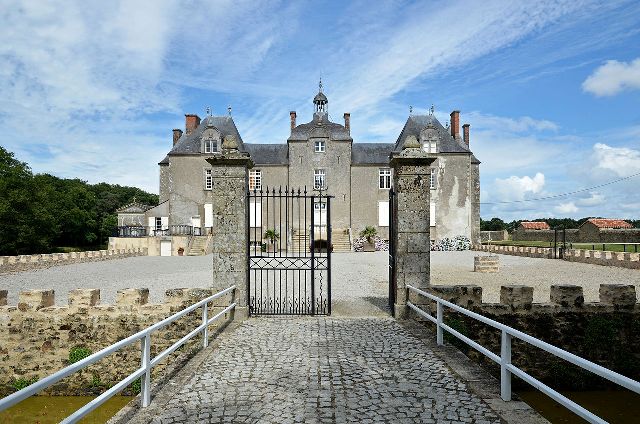 Location: Legé, in the Loire-Atlantique departement of France (Pays de la Loire Region).
Built: 17th century.
Condition: In good condition.
Ownership / Access: Privately owned.
ISMH Reference Number: PA00108633
Notes: Château de Bois Chevalier is a castle located in Lege, France.The castle is built of granite covered with plaster, in a classic style. It is surrounded by decorative moat. It consists of a central building around which the facades are arranged symmetrically and consists of six pavilions.The castle was built in 1655, and unlike other sites it does not replace an existing castle. Sponsor is Olivier du Bois Chevalier (1601-?), Squire, alderman and president of the Nantes tribunal; his son, Charles Cesar Chevalier, counselor to the king, became mayor of Nantes between 1676 and 16783. The Château du Bois Chevalier is châtellenie erected in 1666. The area is occupied by Charette in 1793 during the Wars of Vendée. The Vendée chef gives the festivities. The monument is registered as historical monuments in 1952 and listed in 1980.

How To Get To Château de Bois Chevalier (Map):