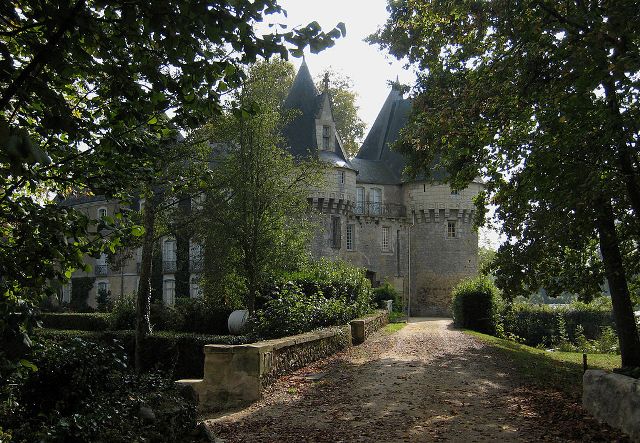 Location: Bazouges-sur-le-Loir, in the Sarthe departement of France (Pays de la Loire Region).
Built: 15th century.
Condition: In good condition.
Ownership / Access: Privately owned.
ISMH Reference Number: PA00109677
Notes: Château de Bazouges is an ancient fortress built in the city of Bazouges-sur-le-Loir in the eleventh century to defend the Haut-Anjou of any desire on the part of the House of Blois or county of Maine. The castle was dramatically transformed in the fifteenth century to strengthen the defense of Anjou during the Hundred Years War. The castle stands on the banks of the Loir.Bazouges Castle depended on the Seneschal of La Fleche. It marked, inside of Anjou, the limit with the Seneschal Bauge and Durtal his stronghold dominated by the castle Durtal. Its owners were members of the Champagne family. A first Baudouin de Champagne of the fifteenth century, was an important figure of the duchy of Anjou. He was a knight and chamberlain of King René, he represented this particular king while traveling in Venice. He was captain of Le Mans and Tours, during the Hundred Years War against the English. In the following century, another Baldwin of Champagne, was chamberlain of Louis XII of France and Kings of Francis. Francis I appointed him ambassador extraordinary from various kingdoms including that of Charles Quint. The sixteenth to the nineteenth century, the castle was in the hands of various owners who changed the fortress by turning it into a pleasure residence and gradually gave it the current configuration The last change of ownership occurred in 1910, when the castle was bought by Adrien Mithouard, the house is still owned by his descendants.The castle entrance is guarded by a gatehouse with two oval towers with battlements. In one of them is a fifteenth-century chapel with a beautiful vault Anjou. Moat, moat, drawbridge and an orchard with the cooler complement the medieval part of the castle. Several main buildings were gradually added, transforming the old medieval castle fortress in the Renaissance Loire. In the guardroom throne an impressive fireplace. Adjoining rooms date back to the eighteenth century. the French surrounded by water gardens surround the castle and in the park, stands a stately mill built between the fifteenth and sixteenth centuries, preserved with its reach and wooden transmissions.

How To Get To Château de Bazouges (Map):