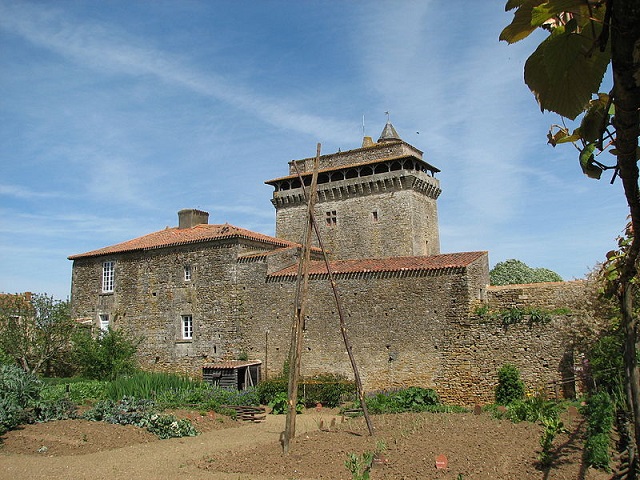 Location: Bazoges-en-Pareds, in the Loire-Atlantique departement of France (Pays de la Loire Region).
Built: 12th century.
Condition: --.
Ownership / Access: --.
Notes: The donjon of Bazoges-en-Pareds is a medieval keep located in the village of Bazoges-en-Pareds in the French department of Vendée.As early as the 9th century, a caste motte defended the valley of the Far and the Arkanson. In 1056, Lord Thibaud de Luneau de Bazoges donated the church of the seigneury to the abbey of Maillezais. In 1356 Jean Luneau fortifies the castle of Bazoges in Pareds, a few kilometers of the old caste castle. Around 1380, Jehan Girard, who inherits from Bazoges by marrying Marie Luneau, fortifies the dungeon. The Girards held the place several centuries, before being replaced by the Baudéan de Parabère then the Carré de Candé. The castle was acquired by the Pervinquière family in 1859, before being bought by the commune of Bazoges en Pareds in 1990. The castle has suffered little from the trials of war. Protestant Bastion during the Wars of Religion, he was besieged in 1594 by Don Alonso, Captain of the Catholic League. It was also occupied by the Infernal Columns of Turreau in 1793. Only the keep, the church, the porch (from the 16th century) and the dovecote remain from the medieval castle today. Restored and furnished on five floors, the keep offers an exceptional view from the walkway on the Vendée bocage. It is visitable as well as the medieval garden and the Museum of Art and Popular Tradition that adjoin it. The dungeon has been registered for historic monuments since February 12, 1927. The parish church, the dovecote, the portal, the archaeological site and the precinct have been registered as historic monuments since 20 October 2003.

How To Get To Château de Bazoges-en-Pareds (Map):