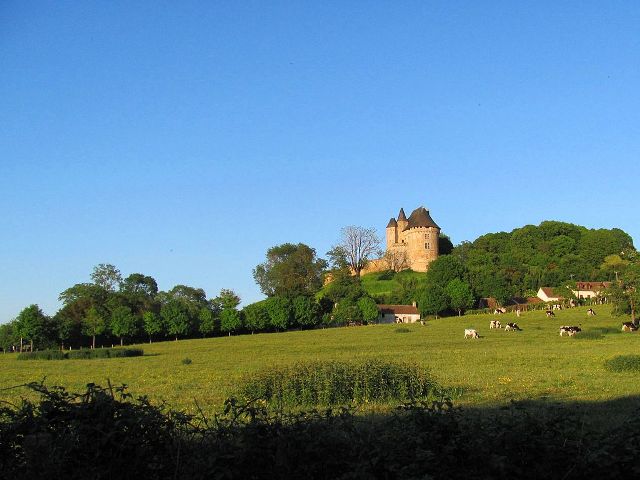 Location: Ballon, in the Sarthe departement of France (Pays de la Loire Region).
Built: 15th-16th century.
Condition: In good condition.
Ownership / Access: Privately owned.
ISMH Reference Number: PA00109676
Notes: Château de Ballon is located in the municipality of Ballon in the department of Sarthe. It was a very important fortress for much of the medieval period. Its present appearance is characteristic of the late fifteenth century.In a dominant position on a rocky outcrop at the edge of a plateau overlooking the Saosnois and between Maine and Normandy, the fortress was the stake of many battles.The location of the castle is old because it is mentioned at the beginning of the eleventh century. It was built by William of Bellême, to serve as a support against the family of the counts of Maine. The fortress soon became the target of the Normans who sought to conquer the south of the region. The castle was besieged twenty times during the eleventh century. It was occupied among others by the Count of Maine, Herbert Awakens Dog in 1031 by William the Conqueror in 1064 and Robert of Bellême in 1080 (1098?) Who rebuilt the castle to its present location. In 1089, Helie of Ball Arrow seized and took the opportunity to ravage the countryside. From the twelfth century, Ball passed into the hands of family Chaources, who kept the castle for two hundred years. The manor was then under the Anglo-Norman influence. To end the hegemony of the Plantagenets, Philip Augustus went to Maine. It took twice Ballon in 1189 and in 1199. The Ballon fortress was then dismantled and burned. Philip Augustus had it rebuilt and placed Hugh Beauçais.

How To Get To Château de Ballon (Map):