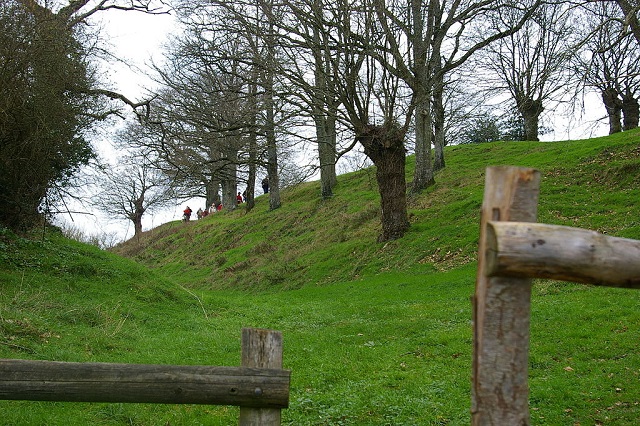 Location: Sainte-Suzanne-et-Chammes, in the Loire-Atlantique departement of France (Pays de la Loire Region).
Built: 1083 - 1087.
Condition: --.
Ownership / Access: William the Conqueror.
Notes: The camp of Beugy or camp of the English is an entrenched camp located at 800 m of Sainte-Suzanne (on the new commune of Sainte-Suzanne-et-Chammes, in the Mayenne), which served as base from 1083 to 1086 the troops Of William the Conqueror, to besiege - in vain - the fortified city held by the Viscount of Maine Hubert II de Beaumont.The Beugy camp, whose state of conservation is remarkable, has been included in the inventory of historic monuments since July 28, 1937 (Archaeological site: 53,255 3 AH). It is an example of a type of military architecture, that of the ramparts of earth and stones. It is about 800 meters north of Sainte-Suzanne, between the departmental road 143 (direction Assé-le-Bérenger) and the communal road 201, dominating plots of prairies near the river Erve, called Beugic by Orderic Vital , Then Beugi, Bongen, Bonjin (cadastre 1842-1843) and today Beugy. The historians who have studied these fortifications agree that the realization of the fortifications is due to William the Conqueror, but in view of its size and form, it may have been built on a pre-existing camp, the infrastructure of which Would have been reused - from Gallo-Roman or Celtic times. The neighboring properties are La motte and Châteauneuf. Covering an area of ​​nearly 2 ha 50, it is made up of two sets of rectangular fortifications facing east and west, separated by a moat, surrounded by moats, and having an original horseshoe shape. The south flank faces Sainte-Suzanne, perfectly visible but out of reach of the arms of the time. The elevations of the earth, reinforced with mixed stones, bore, in the eleventh century, wooden fences and towers. A drawbridge connected the two sides of the camp.