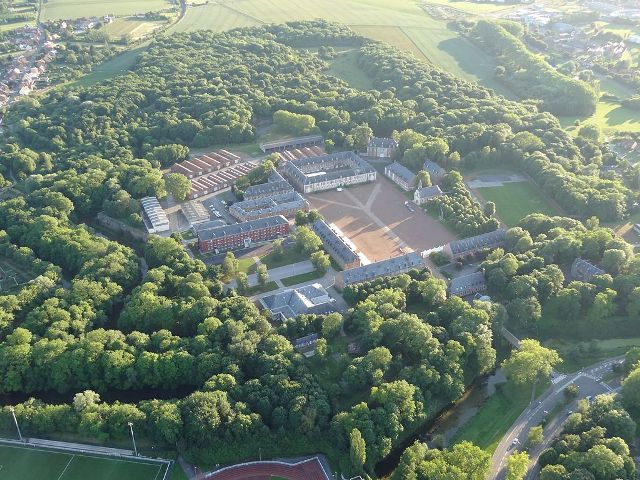 Location: Arras, in the Pas-de-Calais departement of France (Nord-Pas-de-Calais Region).
Built: 14th century.
Condition: In good condition.
Ownership / Access: --
Notes: Citadelle d'Arras was built by Vauban from 1668 to 1672, to defend the place of Arras. It is a World Heritage Site by Unesco. The construction of the citadel was projected at five different locations of Arras in the city, near the main square, the Ronville door, in the work of Baudimont or between the gates of Amiens and Hagerue. This last project was chosen because it forms a right angle between the city and the city. Construction takes place from 1668 and ends in 1670. In parallel, the ramparts pâtirent. When Vauban defined his backyard for providing defense against the French invasions, it defines a second line of defense at Arras, and built the citadel of the city. Never attacked the citadel is called "the beautiful useless". In 1715, some underground serve prison. In 1830, after the constitutional charter of 14 August, the temple of the citadel is transformed in store. It decays since. Historical Monument partially classified in 1920 and 1929 and in full in 2012, the citadel is a World Heritage Site by UNESCO in 2008, including a major twelve fortifications of Vauban. The citadel is demilitarized in 2010. The state then outsources the Arras Urban Community. A consultation for the development master plan was launched in April 2010. According to the project announced in January 2011, the citadel house a recreation center, a housing division and an economic center. The Arras citadel is called the "great need". According to the author of Charles Lalleau, the nickname comes from the fact that there was no easement between Arras and its citadel. The walls were later destroyed and the square was not formed. The citadel in July hosts the Main Square Festival.

How To Get To Citadelle d'Arras (Map):