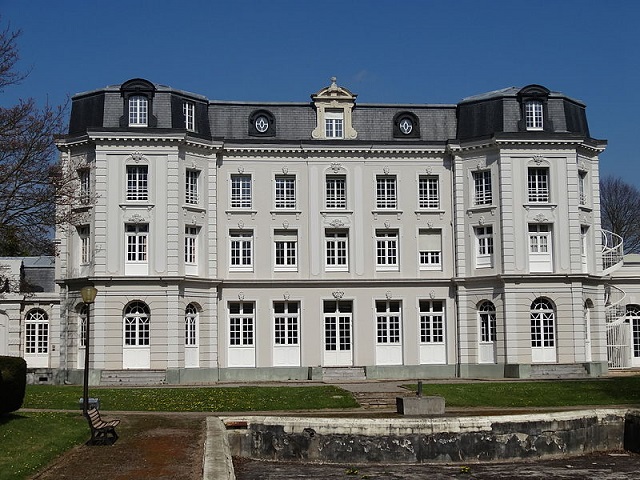 Location: Mazingarbe, in the Pas-de-Calais departement of France (Nord-Pas-de-Calais Region).
Built: 19th-20th century.
Condition: In good condition.
Ownership / Access: Owned by the municipality.
ISMH Reference Number: PA62000097
Notes: Château Mercier is an employer castle mining area of Nord-Pas-de-Calais, built in the early twentieth century to the Director General of the Mining Company Bethune Louis Mercier, Mazingarbe, Pas-de-Calais, Nord -No-de-Calais, France. It aims to serve as housing and meeting room. Damaged during World War II, it was rebuilt and enlarged. After the death of Louis Mercier in 1927, his successors at the head of the company are used to reside in the castle. After nationalization, the building was transformed into motherhood from 1946 to 1970 and then abandoned for fifteen years. In 1985 it was bought by the municipality in which the new town hall. Mercier castle and its grounds and its annexes, is a listed building on 9 October 2009. With engineering houses, it is listed as World Heritage by UNESCO, where it is the site No. 81 .A coal research company was founded on October 1, 1850. It turns into civil society by act of 25 September 1851 and became the Mining Company Bethune. The work of the first pit starting in March 1852 and its commissioning was held in 1853, when it already produces 7000 tons of coal, a figure tripling the following year.Spurred Louis Mercier, originally an engineer at the Anzin Mining Company, which later became General Manager of the Mining Company Bethune, it grows considerably: the surfaces of plants are developed housing estates are built and community facilities are in place. In 1901, the Pirckher engineer has several projects to build a castle for the director. One wing of the original building is preserved while a large main building is realized. A second wing, identical to the first, closes the composition U. Common accompany the building. A large park with ponds is created in addition to the remains of its southern part. The castle not only serves as a housing for Louis Mercier, but he also used it as a meeting room with the leaders of the company or the Parisian authorities.