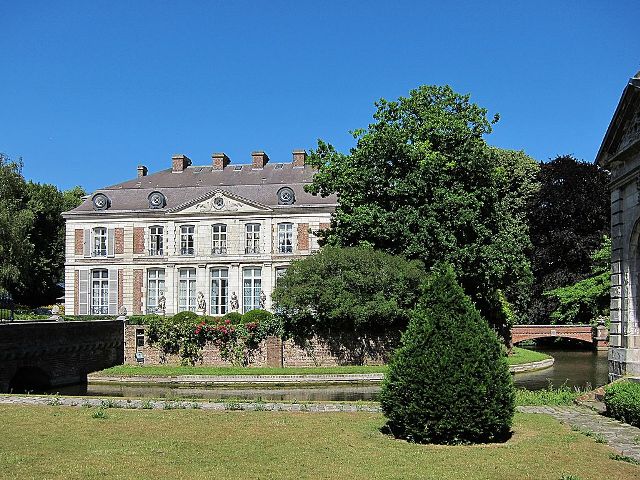 Location: Bondues, in the Nord departement of France (Nord-Pas-de-Calais Region).
Built: 1660.
Condition: In good condition.
Ownership / Access: Privately owned.
ISMH Reference Number: PA00107380
Notes: Château du Vert-Bois is a castle located in the town of Bondues in the Nord department. It is registered in an area of 60 hectares which includes a craft village, two restaurants, the castle and its grounds. The park, about fifty hectares, includes sculptures by Giambologna, Eugène Dodeigne, Jules and Paul Hemery Paressant. The castle itself has collections of paintings, sculptures, furniture and silver for most of the eighteenth century.In 1602, André de Fourmestraux of Wazières (knighted by the King of Spain November 3, 1623 and knighted by the king himself March 31, 1642) wife Jeanne Deliot. Following this union the field of Green-Wood Bondues manages to Wazières family and their son Jean-André is fully recognized lord of Vertbois when granting its quality knight by the King of Spain in January 16421. the first castle of Vert-Bois was built in 1660 by Jean-Andre knight Fourmestraux of Wazières, Lord of Greenwood, La Rive and Hacquebart, who married in 1639 Marie Kessel, Philippe girl Kessel manufacturer Castle Wattignies in 1640. It remains the current external buildings (concierge and loft). In 1743, his grand-son, Jean-André, had built the main building of classic French style, era of madness. It is surrounded by a moat and four pavilions: the Pavillon de Flore, the Chapel and Chinese pavilions. In 1853, Count Louis Wazières (1774-1853) (CL1) dies and the title, the castle and the land passed to his son, the new Count Louis Wazières (CL2) (1816-1856), Imperial Court Prosecutor Boulogne-sur-Mer. He dies two years later. His eldest son, 4 years old, Gaston Wazières (1852-1881) (CL3) is the title of Count. Orphaned of his parents and grandparents in 1861 at age 9, he is placed under guardianship with his younger brother of Camille Wazières (1853-1920). In 1869, Louis Duchochois sign a lease rent on land, with Eugene Devemy (1824-1906) as operator. By notarial act of 19 April 1876, the castle was sold by Gaston Wazières, just inherit his majority in Eugene Devemy who was the operator since 1869. In 1879, Mr Devemy marries his daughter Martha (1860 / 1937) to Albert Félix Prouvost (1855/1916) and son of Amédée Prouvost (1820/1885). By this marriage, the Château du Vert-Bois enters Prouvost family, large industrial wool. From 1939 to 1945, the castle was restored and modernized into a modern place of residence. It is still inhabited by the descendants of the family. The monument is the subject of a registration as a historic monument since December 17, 1962.

How To Get To Château du Vert-Bois (Map):