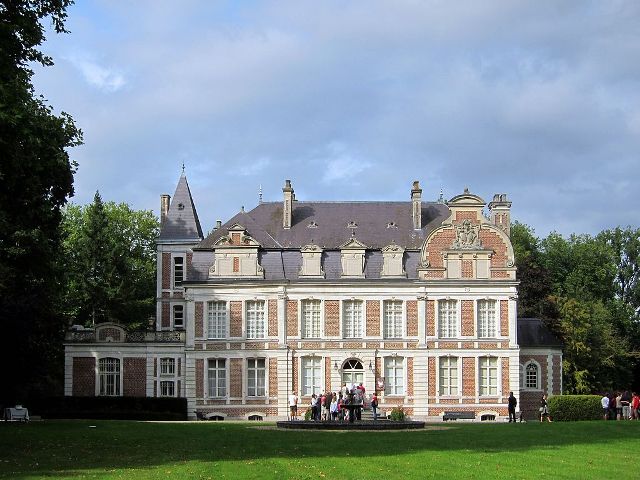 Location: Quiestède, in the Pas-de-Calais departement of France (Nord-Pas-de-Calais Region).
Built: 17th-19th century.
Condition: In good condition.
Ownership / Access: Privately owned.
ISMH Reference Number: PA00108379
Notes: Château de Laprée is a castle of the eighteenth and nineteenth centuries Quiestède located in the Pas-de-Calais. Since 1669 the land Laprée was never sold and was transmitted in the family Lencquesaing, almost always from father to eldest son. Originating in Hainaut, the Lencquesaing settled in area, in the Spanish Artois, in the early seventeenth century there holding the receiver long office areas before obtaining the aid of Artois. Several ancestors were Mayeurs Aire. The rich archives of family Lencquesaing, kept mostly to Castle Laprée (but also in the Clouet funds Pesruches the Departmental Archives of Pas-de-Calais) formed the subject of a study on the representations and the self-image of a noble family in Artois under the old regime.Laprée earth depended on the lordship of Quiestède. It belonged in 1425 to Jean de La Viéville Gauwain said. She then went on a date unknown to the Le Roy family versed in the law and well regarded in Aire. Mathieu Roy, a law graduate and lawyer in the spiritual court Therouanne possessed in 1505. Claude Le Roy, Lord Laprée, was knighted in 1605.Fortune very burdened abandoned by Francis Eustache Le Roy forced his widow and his son to sell the fief, land and lordship of Laprée with its 80 steps (forty hectares), the three little fiefdoms within her, the house stately and its dependencies. The whole was awarded by the Board of Artois in September 1669 to Jean-Jacques de Lencquesaing II (1629-1683), the main creditor of this family. Indeed, in January 1663, Eustache-François Le Roy, alderman of Aire, Lord of Quiestède and Laprée, had bought for 7000 florins recipe domain Aire and had not fully paid this office when the death surprised. The acquisition of land Laprée and its old feudal castle enclosed by ditches and a drawbridge is highly symbolic of the state of his new owner: in fact, Jean-Jacques II Lencquesaing, receiver of aid Artois and mayeur Aire, had just been knighted by King Philip IV of Spain (1661), in memory of the eminent services rendered by his father in the offices of area 1641. He undertake work for importance in 1676, as evidenced by the building of the top cartridge mistakenly called "pigeon". The Lencquesaing continued to live in area and only came occasionally to Laprée, it probably refuge in the terrible seats of their city in July 1676 and in September 1710. In 1684, the marriage contract of Georges Louis Werbier, grand bailiff of Aire, and Marie-Anne Joseph Lencquesaing, daughter of Jean-Jacques II (died the previous year), was signed at Castle Laprée to mark the solemnity of the event. At the death of Francois-Jean-Jacques (1670-1720), mayeur area - he presented to King Louis XIV plans of the current Town Hall - the castle, left to farmers was in a disastrous state : its foundations were sinking into effect in the mud that completely covered the ditches.

How To Get To Château de Laprée (Map):