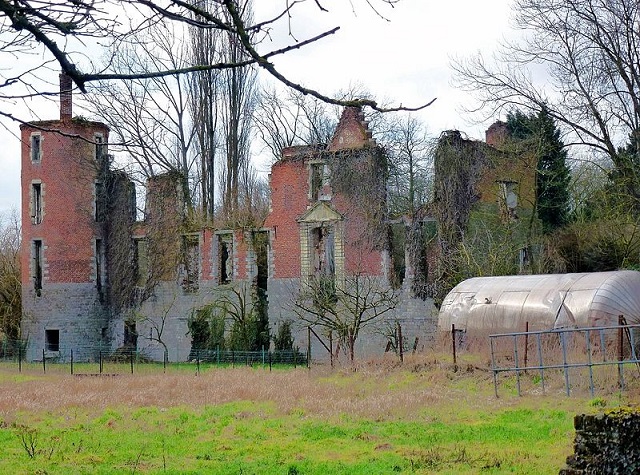 Location: Goeulzin, in the Nord departement of France (Nord-Pas-de-Calais Region).
Built: 12th century.
Condition: Ruined.
Ownership / Access: Private property.
ISMH Reference Number: PA59000087
Notes: Château de Goeulzin Goeulzin is located in the Nord department. It is the subject of a registration as a historic monument since August 3, 2007.There was a castle in Gœulzin at the end of the thirteenth century. Burned under Philip the Fair, it was rebuilt by Enguerrand of Gœulzin. Its first written mention dates from 1310. The manor house then stood on a large terrace overlooking a low marshy bottom at 33 meters. The platform was rectangular 20 m by 40 m side and bordered by wide moats of 10 to 15 m wide. To the west, there was a large trapezoidal enclosure of 110 m by 80 m, surrounded by ditches and occupied by various farm buildings and open spaces (near and gardens). This is the backyard of the strong-stately house now occupied by buildings of the eighteenth and nineteenth centuries. A Sensée water diversion system allowed to feed the moat surrounding the castle and its backyard that were so isolated, as well as the park. He completed an irrigation network for lands south of the castle that already existed in the early nineteenth century but whose existence was probably much earlier. Most of the village, with the castle and bell tower, depended on the lord of Oisy. The village is burned twice in the sixteenth century, in 1521 and in 1582. The castle then was severely damaged, with reconstruction campaigns as confirmed by the two inscriptions of the tower southeast corner dating it to 1576. in the following century, the lordship passed to the earls of BUCQUOY home Longueval. The castle was rebuilt in the early seventeenth century on the foundations of sandstone of the old manor by Charles Albert Longueval, Count of Bucquoy (de), Grand Bailiff of Hainault and Governor of Valenciennes. Earlier constructions survived more then that high base taluté pierced with loopholes and cannon and certainly the towers.The building from the seventeenth century transformations adopts plan L consists of two bodies of rectangular dwelling placed at right angles. It grows on only part of the old castle which he abandons the northern part with its tower northeast corner. The body is confined to southern home on the south side two round towers topped with pepper shaker s. It has two floors squares topped with a penthouse on a strong base pierced with openings. The whole is still well preserved until the band of the 1st floor. The doors of the ground floor opened onto a balcony occupying the entire length of the front strong enough projection and worn by invoice iron consoles very simple and closed by a wrought iron railing. There remains some consoles. The scansion of the facade is made on a ternary rhythm: a central span composed on the ground floor of a summed window of a curved pediment, two rectangular windows and a large skylight topped by a curved pediment decorated a shield with arms, surrounded by two sets of two bays topped with a gable no-sparrows with an opening roof to light up. The west side façade of this wing, very well preserved, shows the same type of gear lying on the opposite wall at the sill of the second floor. His return courtyard is kept at the ground floor of two bays. In this courtyard, masonry sandstone sills rises up from the first floor windows.As for common, they are now separated into two parts by a private road. They are an important part of the former backyard of the castle. Even before the Revolution, the buildings occupy a large trapezoidal surface at an east-west axis with two crossings during their axis by a passage. Between 1812 and 1866, probably at the time of the work of Louis Taffin, transformations had taken place: the closure of the yard is to the castle was gone, as is the southwest wing of the second court. Since then, some changes have occurred: first the destruction of a west wing portion of the second courtyard and a small piece of that south courtyard. Currently, the remaining parts are divided between two groups of owners. In the south, the T-shaped buildings are the property of Mr. and Mrs. Serge Nal, also owners of the castle, and are their main dwelling. The northern part, twice as large in area as well as the ice-dovecote tower owned by Mr. and Mrs. Eric Dupire.