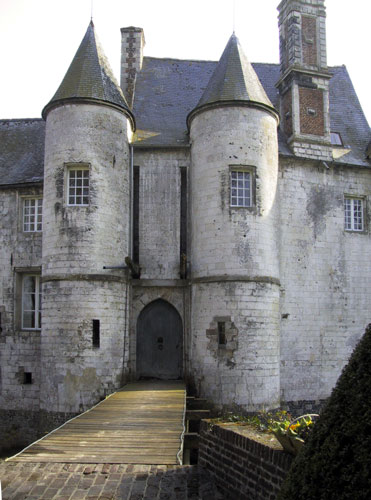 Location: Estrée-Blanche, in the Pas-de-Calais departement of France (Nord-Pas-de-Calais Region).
Built: 14th century.
Condition: Ruined.
Ownership / Access: --
Notes: Château de Créminil is located in Estrée-Blanche, in the Pas-de-Calais, Bethune district in France. It is the subject of a classification as historical monuments since 19 April 2005. The castle Créminil is attested from 1329. It is the family Le May who built the castle in 1443 which was restored after the damage caused by the troops of the sixteenth century. The successive inhabitants of the castle were: the family Le May in 1540 Hugues de Buleux in 1670 Antoine de Vignacourt The MERCHIER and family from 1687 to the Revolution. During the War of Spanish Succession when Lille Headquarters (1708) on 2 September, Prince Eugene of Savoy-Carignan carried two columns of his army Estrée-Blanche and another column led by the Duke of Malborough headed Divion. The Duke of Marlborough had even camped Estrée-Blanche 21 July 1708. The park of the castle of Créminil (that is to say, the avenue of lime trees leading to the castle, the park and the surrounding parkland bounded by the river Laquette) is a historical monument and registered in the pre-inventory of remarkable gardens.