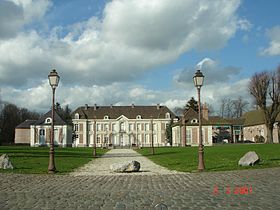 Location: Roost-Warendin, in the Nord departement of France (Nord-Pas-de-Calais Region).
Built: 1743.
Condition: In good condition.
Ownership / Access: Owned by the municipality.
ISMH Reference Number: PA00107788
Notes: Château de Bernicourt was built in Roost-Warendin in the Nord department in the early eighteenth century.The first castle was previously Bernicourt from around 1374) with a manor farmyard. It was built in 1743 in its present form on an area of 25 hectares. Until the early twentieth century, it was a mansion. It was the property of Houillères 1930 to 1985, executives and employees were housed there. Since 1985 it belongs to the city of Roost-Warendin. Restored by the will of the city, he finds, year after year, its former splendor. Opened in 1989 to the public, castle, drained of period furniture, now hosts temporary exhibitions on the ground floor and a museum on the 1st floor and the basement. It was partially registered historic monument June 30, 1987: the castle and pavilions, the portal and its gate, the farm building, grid and its four gates

How To Get To Château de Bernicourt (Map):