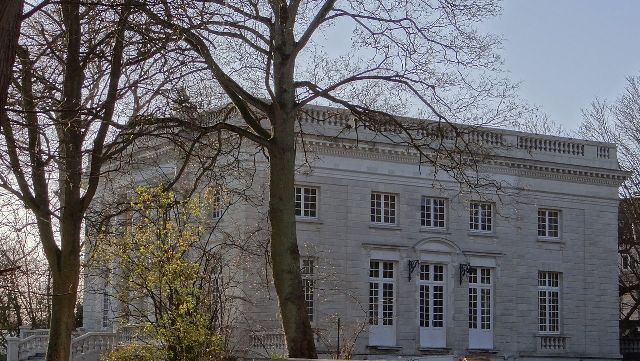 Location: Cysoing, in the Nord departement of France (Nord-Pas-de-Calais Region).
Built: 18th-19th century.
Condition: In good condition.
Ownership / Access: Owned by a public institution of the State.
ISMH Reference Number: PA59000139
Notes: Abbaye Sainte-Calixte de Cysoing was founded in 833 by Eberhard of Friuli and his wife Gisele. It is closely linked to that of the town of Cysoing. There currently exists a castle to its location.It is through it that over the centuries the town prospered and gained a strong reputation throughout France. The abbey was founded in the late ninth century by St. Eberhard of Friuli, on land that his wife, Gisele, was brought as a dowry. It must be said that the young woman is the granddaughter of Charlemagne and the sister of Charles the Bald. She married 8000 hectares of land in its possession. The cult becoming the late Middle Ages permanent source of unrest, riots and battles, this time causes huge excess from looters sizeable groups. Abbey Cysoing was then sacked by the "Beggars," a band of looters who were traveling in the area of ​​Tournai and Menin. Soon after, in 1566, residents Seclin Gondecourt and Houplin led by Guislain Haynin (first of that name to be lord of Breucq Seclin) reach in gang up, block by combining their efforts and push them permanently in the marshes there was then between Seclin and Houplin Gondecourt. (Revolt gueux6) Louis XV, in 1744, staying a few days in the abbey. After the campaign of Flanders, he won the battle of Fontenoy in 1745. In 1751, the abbot of Cysoing, Laurent de Roque, erected a blue stone pyramid in memory of the passage and the king victory. This pyramid, which also has only the name because it is actually an obelisk, measuring almost 17 meters in height. Built in the heart of the abbey park, one can still see today. During the French Revolution, the abbey is literally ransacked. In 1792 it was looted, books, furniture and paintings in it are taken and in 1793, it is even burned. The revolutionary confiscations gathered in the former convent of Recollects, rue des Arts in Lille.