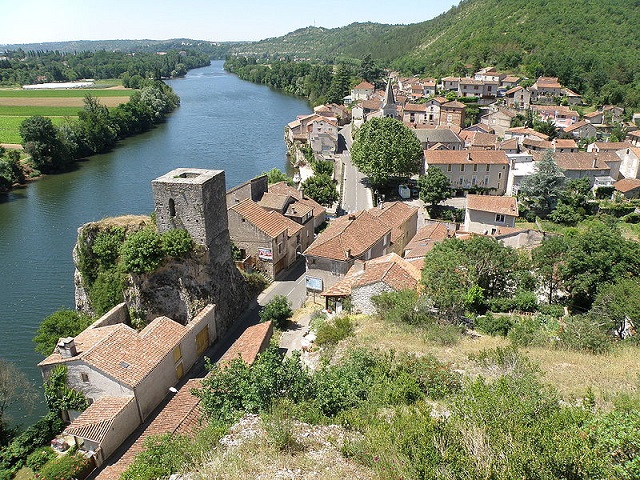 Location: Laroque-des-Arcs, in the Meurthe-et-Moselle departement of France (Lorraine Region).
Built: 13th century.
Condition: --.
Ownership / Access: --.
Notes: The tower is a historical monument located in Laroque-des-Arcs in the Lot (Occitania region).The castrum of La Roque is mentioned as such in 1231 then in 1237. The tower was built in the first half of the thirteenth century. In the middle of the thirteenth century, the castrum belonged to Fortanier II of Gourdon († 1260/1261). In 1258, he reserved it to his son Pons II de Gourdon. In 1280, Hugues de La Roque, brother of Pons II of Gourdon, pays homage for this fief to the bishop of Cahors. Another Fortanier de Gourdon sold in 1297 his rights over La Roque to Guillaume de Jean, a bourgeois of Cahors. The seigneury of La Roque was probably shared among several members of the family of Gourdon because, in 1300, Bertrand II of La Roque († before 1333), grandson of Hugues de La Roque, is lord of La Roque and Saint -Cirq, co-lord of Gourdon. The latter signed an agreement in 1305 with the consuls of Cahors giving the carducians the free passage on his lands telling the payment of 500 livres. Local tradition says that Bertrand de Gourdon used this tower as a tower for payment of the grant. However, there is no evidence of this use. In 1436, Jean III de Penne, son of Marquèze de La Roque and Arnaud de Penne, inherited from Cenevieres his uncle John II of La Roque, he is co-lord of Gourdon, lord of Cenevieres, La Roque and Puylagarde . In his will he bequeathed the castrum of La Roque and the borie of Polminhac to his son Pierre de Penne. The seigniory of La Roque remained in the family of Gourdon until the beginning of the seventeenth century, after the marriage of Gilette de Gourdon, lady of La Roque, with Antoine-Jean de Fontanges, in March 1601. He transferred his property to His nephew Charles de Fontanges, and his daughter Juliette de Fontanges, who married Gaspard de Monclar, lord of Montbrun. His son Jean-Charles de Monclar married in 1694 with Magdeleine de Chapt-Rastignac but died in 1696. Magdeleine of Chapt-Rastignac married in second marriage, in 1700, with Antoine de Lagrange-Gourdon, marquis of Lavercantière Bringing him the fief of Laroque-des-Arcs and the borie of Polminhac. The building was declared a Historic Monument on 23 April 1979.