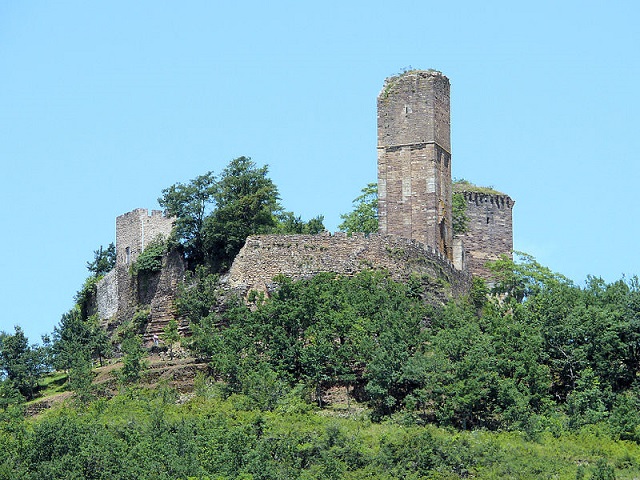 Location: Saint-Laurent-les-Tours, in the Meurthe-et-Moselle departement of France (Lorraine Region).
Built: 11th century.
Condition: --.
Ownership / Access: Conseil général du Lot.
Notes: The castle of Tours-Saint-Laurent, or castle of Saint-Laurent-les-Tours, is a medieval fortress located on the territory of the homonymous commune of Saint-Laurent-les-Tours, in the historical region of Quercy, The valley of the Bave and the town of Saint-Céré.The first traces of a fortress on the St. Lawrence-les-Tours peak, culminating at an altitude of 465 m on the valley of the Bave, and thus a strategic point of observation important, go back to Roman Antiquity , As evidenced by the weapons and coins found during archaeological excavations. A text of the thirteenth century specifies that the installation of these camps of the Roman army on the heights of St. Cere would date from the reign of the emperor Augustus. The first medieval edifice originated in the seventh century, at the request of Lord Serenus. The latter will give its name to the village of Sanctus Serenus, formed in the lap of the castle, corresponding to the current commune of Saint-Laurent-les-Tours. With the centuries, the village of the foot of the valley will surpass in importance first, and will recover then the surname of Sanctus Serenus, to become subsequently Saint-Séré, and finally Saint-Céré. As for the first original village, it is renamed after the patron saint of the day of the loss of its historic title: thus was born the name of Saint-Laurent-les-Tours, and consequently that of the castle of Tours -Laurent.