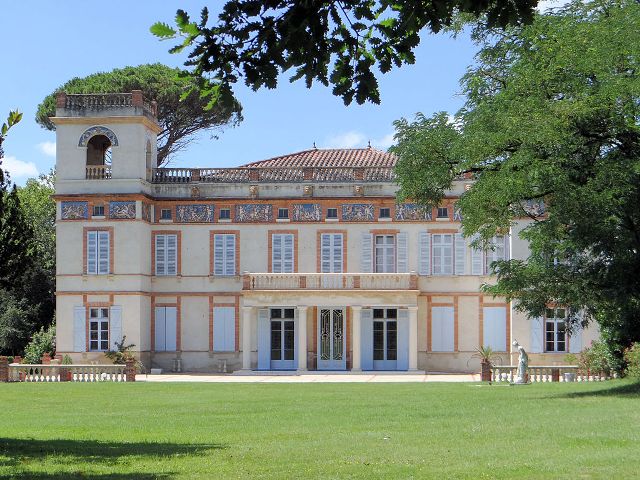 Location: Villebrumier, in the Tarn-et-Garonne departement of France (Midi-Pyrenees Region).
Built: 19th century.
Condition: In good condition.
Ownership / Access: Owned by a private company.
ISMH Reference Number: PA82000009
Notes: Château de Villebrumier, is located in Villebrumier in the southwest of France between Toulouse and Montauban. You can find outdoor and indoor mosaics Gaston Virebent. Pierre Gerla, the son of the local notary, became a deputy to the Council of Five Hundred (the last legislature before the Consulate and the First Empire), then returned to the country, built the castle between 1809 and 1815 on a large plot on the edge of Tarn. He reused the foundations of an older building that is part of a farm. Pierre Gerla died without children, the castle passed to his nephews and their own heirs, the BENAIS family, who lived there until 1877. During this period the castle benefited from the addition of a new floor and two towers, and numerous interior and exterior embellishments. In 1877, the balance of a debt, the castle was sold to a noble family of patrons and artists, the Comte and Comtesse de Marigny. From 1890 to 1908, Jean de Marigny made the castle transformations and embellishments important: redesign of the facade, elevation towers, creating a peristyle facade ornamentation friezes of polychrome earthenware Gaston Virebent, creating a large reception room decorated with a tiled ceiling Gaston Virebent and a monumental fireplace ... Jean de Marigny had relations with many writers, artists, politicians. In particular, he befriended the great sculptor Antoine Bourdelle, who made several visits to the castle, and Jean de Marigny supported financially. His wife Camille de Marigny painted mural paintings on themes related to hunting and nature. The death of Jean de Marigny in 1927, the castle was sold to the family of a Toulouse physician, Dr. Azam, as the residence; he then passed to his heirs. After some time he ceased to be well maintained but served as a temporary hospital during the Second World War. In the 1960s, part of the park was operated as orchard, and even pig farming; in 1989 part of the park was transferred to the municipality for the construction of a retirement home. In 1996 new owners, the Laporte family restored the castle, which was registered with the additional inventory of historiques1 monuments and made important extensions. The park was enriched with many rare species. The castle became a popular venue for events such as concerts, scientific seminars, weddings and family reunions.

How To Get To Château de Villebrumier (Map):