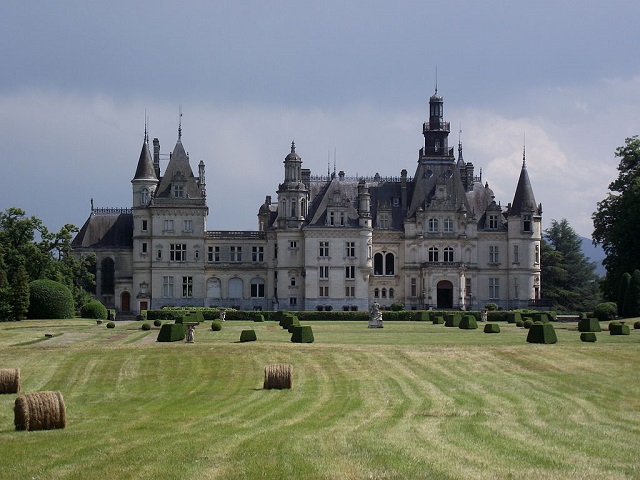 Location: Montréjeau, in the Haute-Garonne departement of France (Midi-Pyrenees Region).
Built: 1893-1905.
Condition: In good condition.
Ownership / Access: Privately owned.
ISMH Reference Number: PA00094399
Notes: Château de Valmirande is on the road to Montréjeau Lannemezan at the edge of the Haute-Garonne and Hautes-Pyrénées. It was built according to the plans of Louis Garros, famous for Bordeaux architect Bertrand Baron de Lassus.Its owner Simone is the Baroness de Lassus.The area is the subject of a classification as historical monuments since 1992.The park and the castle gardens are classified "Remarkable Garden" by the Ministry of Culture.Only 24 years old, Bertrand de Lassus built in Montréjeau, in 1892, an extravagant and sumptuous neo-Renaissance building, with its chapel, large beds, a park with an area of ​​41 hectares. "Near the Royal Palace," said Henry Russell.Bertrand de Lassus acquires ten parcels in one piece to the exit towards Montréjeau Lannemezan in spring 1893. The first stone was laid in October 1893. In 1898, only five years later, the castle, the surrounding wall and dependencies are built.Castle 70 m long and 40 m high was inspired by the castles of the Loire (Chambord, Chenonceau, Azay). Dependencies are in bigourdan style.The castle is officially opened and blessed by Bishop Matthew, Archbishop of Toulouse, 3 November 1899. On this occasion, the archbishop pointed out to Baron missing a chapel.The chapel was added to the wing between 1902 and 1905. It was blessed March 25, 1905 by Bishop Germain, Archbishop of Toulouse. You can admire beautiful marble, stained glass, enamels and a statue of Christ of Louis-Ernest Barrias.

How To Get To Château de Valmirande (Map):