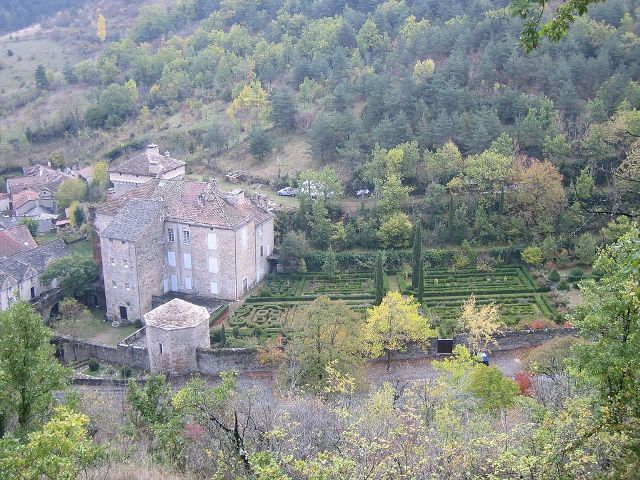 Location: Peyreleau, in the Aveyron departement of France (Midi-Pyrenees Region).
Built: 16th century.
Condition: In good condition.
Ownership / Access: Privately owned.
ISMH Reference Number: PA00094097
Notes: Château de Triadou is a castle located in Peyreleau, France.This house was built from 1470 and inhabited in July 1479 by Peter II of Albignac, Lord of Triadou, and his wife Flora Capluc, daughter of William and sister of Louis Capluc Capluc by which the couple received endowment half the land which was part Peyreleau. The land chosen for the construction of the castle was the property of Rozier monks of the Abbey of Aniane. Before settling in Peyreleau is the castle of Mostuéjouls that sat the lords of Albignac. Despite the importance of the work undertaken, the Triadou long remain unfinished. In 1510, William of Capluc dies and all his land back to the family of Albignac. His son, Louis Capluc have indeed chosen to take orders by becoming pastor of Auzits is Flora Capluc inheriting property and thus the game of alliances, Pierre Albignac her husband. Pierre will die Albignac 4 April 1517. Flora Capluc survived him only a few months. In 1559, Peter III of Albignac (1529-1596), grand-son of the preceding, had plans to expand the family home by adding an additional wing but the finances did not allow the realization of such an undertaking. On the occasion of the passage between Meyrueis and Millau Protestant troops led by Captain Arnaud de Méjanès, Pierre Albignac was ordered to cut their passage. So he led an attack at Mount Fraysse in the personal goal of seizing transported war chest. The operation was a success: his work could now materialize. Part of the large booty was hidden in the castle and Pierre Albignac will die without having revealed to his heirs the place of the treasure. Philip Francis of Albignac will never see his land. He ended his days in London where he died a January 3, 1814. Annexed by the town, the castle was a time of city hall in the village of Peyreleau until the construction of a new building in 1893. Historical monument 12 May 19441, is now shared between several owners.