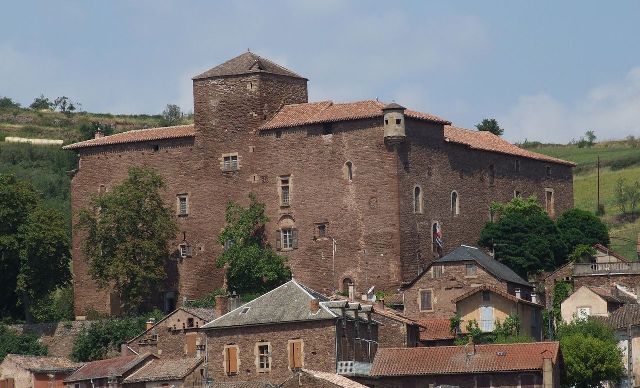 Location: Saint-Izaire, in the Aveyron departement of France (Midi-Pyrenees Region).
Built: 1317-1346.
Condition: In good condition.
Ownership / Access: Owned by the municipality.
ISMH Reference Number: PA00094237
Notes: Château de Saint-Izaire is a fourteenth-century bishop's castle in the commune of Saint-Izaire in the Aveyron. It overlooks a meander of Dourdou. It serves in turn as a summer residence of the bishops of Vabres and place of refuge from the dangers of the castle time.The the subject of a classification as historical monuments since 19 April 1991.who donated to the Abbey Vabres near Saint-Afrique (the written record of the donation is still preserved in our time). In 1317, the priory and the Saint-Izaire coseigneurie become property of the new bishops of Vabres. During the Hundred Years War, Stephen of Vassignac 7th bishop sides with the English who install a garrison at the castle. It remains there until January 1370. William Bastidos 9th bishop, undertook the restoration of the ramparts. In the fifteenth century, the bishops moved to Saint-Izaire. The canons of Vabres calling for the return of Jean Pierre, 10th bishop. At the time of the Reformation, crises bring bishops in Saint-Izaire, especially after 1568, when the cathedral and the Episcopal palace Vabres were burned by Antoine de Crussol. Francis I of Valletta-Cormusson, 17th bishop must pay a ransom and took refuge in Saint-Izaire. François Valette-III of Cornusson, 20th bishop begins the construction of new apartments in 1639 and 1644 that continues to Louis Baradat, 23rd bishop and godson of Louis XIV. This brings together diocesan synods at the castle, including in 1679. In 1710, the castle fell into disrepair. John of the Cross de Castries, 25th and last bishop, the fact declare "in decay", which exempts maintenance.This massive building in red stone, quadrangular, was kept in the middle of the south wing with a high tower-dungeon demolished half of the nineteenth century. It includes murals in the tower dating from the fourteenth century, the spiral staircases and a ceiling in the room baroque bishops dating from the seventeenth century.