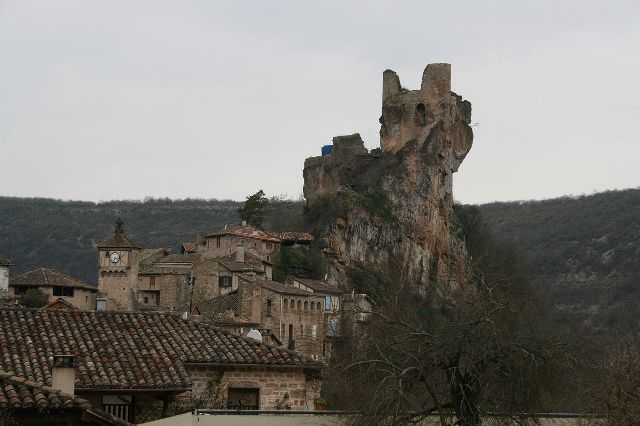 Location: Penne, in the Tarn departement of France (Midi-Pyrenees Region).
Built: Moyen Age.
Condition: In good condition.
Ownership / Access: Owned by a private company.
ISMH Reference Number: PA00095615
Notes: Château de Penne is a castle of the twelfth century situated in the municipality of Penne in the Tarn in the Languedoc-Roussillon, Midi-Pyrenees. The castle was erected from the Merovingian period. Its exceptional situation allowed it to play a leading role in the history of Quercy. During the Albigensian Crusade, there is the challenge of bloody wars between the lord of Penne, rallied to the Cathar heresy and supporters of Simon de Montfort IV. Later, during the Hundred Years War, English road and seize turn the fortress. Fell into disrepair during 450 years, it is currently being restored. Axel Letellier, a trained architect, bought the castle in 2006. From 2009 to 2011, a restoration program is underway at the initiative of the new propriétaire6. The different phases of annual work represents a budget of 80,000 euros. The region and the department contribute up to 15% each in financing. The castle was opened to the public in June 2010.

How To Get To Château de Penne (Map):