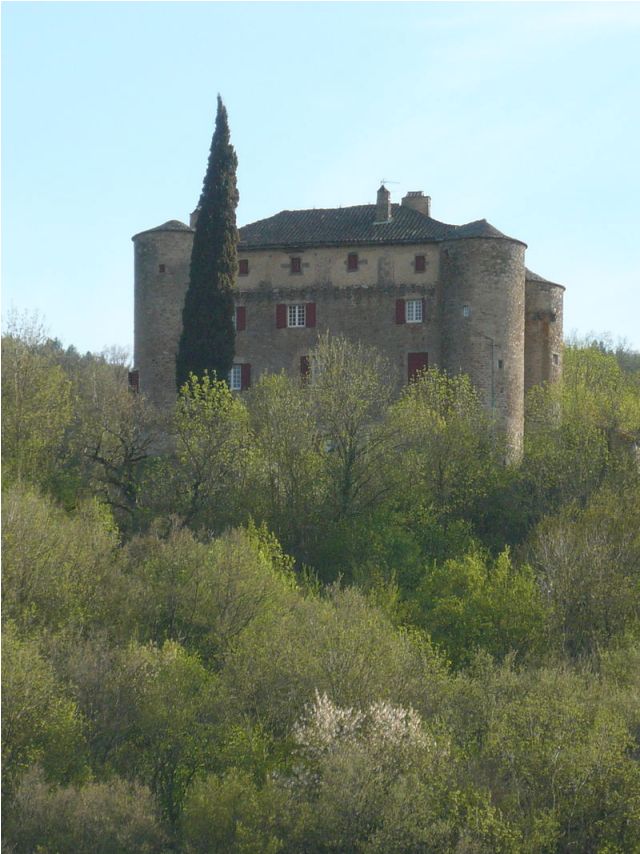 Location: Versols-et-Lapeyre, in the Aveyron departement of France (Midi-Pyrenees Region).
Built: 14th century.
Condition: In good condition.
Ownership / Access: Privately owned.
ISMH Reference Number: PA00094194
Notes: Château de Montalègre is a medieval castle located in the valley of the Sorgue in the town of Versols-et-Lapeyre in the Aveyron department. The Montalègre feudal castle consists of an almost square main building with two floors, flanked by four round towers. The third floor attic is now included defense systems. Access to floors is via a spiral staircase in the center of the south facade where there is a projection. The southeast tower has a first floor nineteenth century decor chapel, above a vaulted cul-de-four bearing traces of painting on religious grounds. The Lordship of Montalègre is known since 1268 but the first known owners seem to be in the sixteenth century a branch of the Counts of Rodez which bore the name Bernard Rodez, Lord of Montalègre son of Bringuier Rodez and Roquefeuil Beatrix Versols which perhaps brought him this land. He married Catherine Ricard, daughter of Hugh and Catherine Montjaux, he has at least one son and three daughters. Jeanne Rodez, heiress of William, Lord Montalègre (1557) and Joan La Jugie brings Montalègre by marriage August 13, 1553 with Magdalon Corneillan, younger son of John, Viscount Corneillan and Florette de Montesquiou . Then the family of Marcilhac and Yzarn Family Valady are the successive owners. The castle is listed as historical monuments in 1978. Recently, the castle was converted into a hotel.

How To Get To Château de Montalègre (Map):