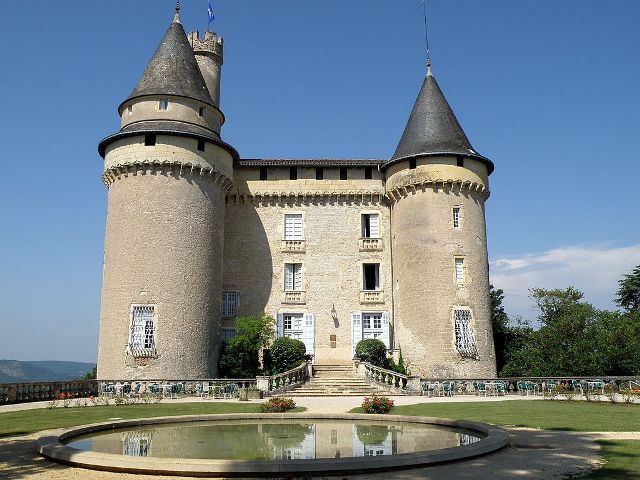 Location: Mercuès, in the Lot departement of France (Midi-Pyrenees Region).
Built: 15th-18th century.
Condition: In good condition.
Ownership / Access: Privately owned.
ISMH Reference Number: PA00095166
Notes: Château de Mercuès is in the Lot department and the Languedoc-Roussillon region Midi-Pyrenees in the town of Mercuès, it was for 7 centuries the summer residence of the Counts Bishops of Cahors. It is now a Relais & Châteaux hotel, a gourmet restaurant a Michelin star and a vineyard in AOC Cahors. It occupies a remarkable site above the right bank of the Lot.In the book devoted to the castle of Mercuès by Father Boulade, former director of a private school in Toulouse, a member of the League of Lot Studies, the author states: "He's talked about this famous place in the life of St. Didier, revered in the Quercy as the Saint Gery, who lived in the seventh century, it is designated as the Mercury Camp; This might suggest that there was a strong, but this is mere conjecture, because there was not strong in all camps. However, as the oldest parts of the current building dates back hardly beyond the thirteenth century, we can attribute the building to the bishops of Cahors, especially if you notice that it must be a formidable fortress; it was sort of the outpost of the city, and it is no wonder that the castle of Mercues has played a big role in the long wars that bloodied the Middle Ages, while the south of France. "It is likely that the bishops of Cahors, to protect the city, which was entrusted to their guard against attack, either English or strips of road which desolated the countryside and ransomed even cities, had built this castle. We must not forget that it was in the care of these prelates that was built the walls of Cahors, part of which still exists; and as for his position, Mercuès was almost impregnable, he was defending the approaches to the city, and commanded the Lot valley, they wanted no doubt adding new fortifications to those they had to raise. The events of the fourteenth and fifteenth centuries were soon to show what services the bishops had just rendered to the cause of independence. "(...) "After 1793, he changed masters several times. Bishop Cousin Balthazard Grainville also became owner. After his death, the castle became a particular property, and remained virtually uninhabited. Towards the end of his episcopate in 1861, Bishop Bardou acquit Mr. Lacoste-Lacroux, are executed significant work and gave a testament to the minor seminary of Monfaucon, who sold it to Bishop Grimardias. This prelate, patron of the arts, wanted to make the building its original splendor and ancient destination. " It is true that many official documents of the bishops were sent to the castle. So, June 9, 1666, the bishop, Baron and Count of Cahors, Nicolas Sevin, brought forth his command of Atonement Rocamadour, after "Given in our castle Merquès".

How To Get To Château de Mercuès (Map):