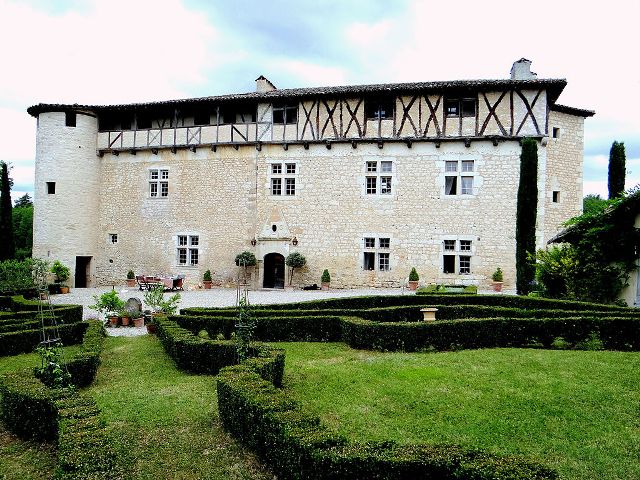 Location: Castelnau-de-Montmiral, in the Tarn departement of France (Midi-Pyrenees Region).
Built: 16th-17th century.
Condition: In good condition.
Ownership / Access: Privately owned.
ISMH Reference Number: PA00095501
Notes: Château de Mayragues or Meyragues is a fortified Renaissance building, located in the town of Castelnau-de-Montmiral in France and listed building since 10 October 1961. A pigeon is also registered. It is home to a winery in the appellation Gaillac. The site is very ancient, of Roman pottery shards have been found in the estate vineyards. A medieval castle was built in the twelfth century. The current castle is the result of the expansion and embellishment made from the Renaissance. The style of the current building dates from the late sixteenth and seventeenth century. The castle has a rectangular shape with towers at three of its corners: a round, polygonal and the last round oriel; This watchtower is the only visible part of brick, the rest of the building is in white stone. It is three stories high, the summit is a walkway timbered. The portal consists of a double-wing wooden door framed by two pillars supporting a basket handle lintel topped with an unfinished triangular pediment. It is an oculus. Beside the gate, a masonry recovery indicates that the building was built in twice. The mullion windows are simple, unadorned. Inside, a majestic stone staircase through the entire depth of the building. From either side, on the ground floor, as the first floor, large rooms are served by stairs. These places have long suffered from their use of agricultural shed, but the owners since 1980 have restored the castle and put the French in the ceiling painted value and two fireplaces: one decorated with a painting of 1686, the other sculptures . The pigeon nearby, in the park, is built on four pillars of stone. Top pillars, circular diameter larger stones constitute a barrier to climbing rats, fond of young pigeons. The bâtiemnt itself is carved wood fittings. The walls are plastered. The steeple roof is flat tiles.

How To Get To Château de Mayragues (Map):