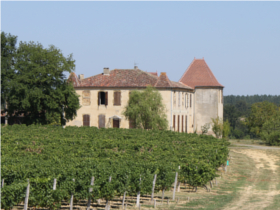 Location: Loubédat, in the Gers departement of France (Midi-Pyrenees Region).
Built: 15th century.
Condition: In good condition.
Ownership / Access: Privately owned.
Notes: Château de Mauhic is a castle located in France in the municipality of Loubédat in the Gers department in southwestern France. Now private property, it is located near the forest of Baquieu where it was built around 1450 and remodeled many times. It included a chapel of the abbey of Berdoues. The last Lord of Mauhic - Jean-Marie de Medrano-Mauhic - was beheaded in Auch April 17, 1794 for conducted against revolutionaries. It is located in the center of a farm and vineyard that extends over a hundred hectares. One of the towers of the recently renovated castle is for seasonal rental.