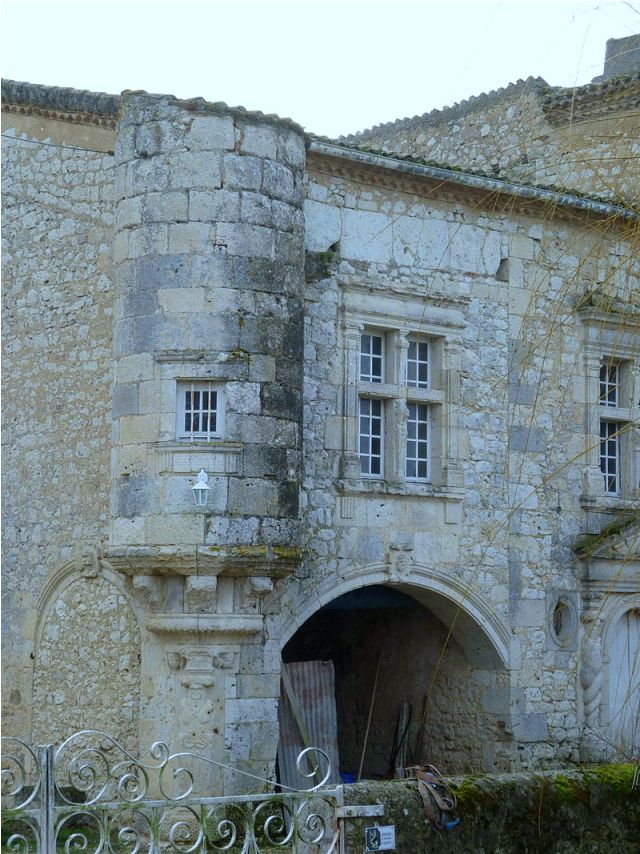 Location: Romieu (La), in the Gers departement of France (Midi-Pyrenees Region).
Built: 16th century.
Condition: In good condition.
Ownership / Access: Privately owned.
ISMH Reference Number: PA00094899
Notes: Château de Madirac is a mansion in the style of the Renaissance Gascon, built in 1582, located in La Romieu, in the Gers. It is the subject of a registration as a historic monument since April 28, 1964.The castle consists of two bodies juxtaposed at right angles. The two corners of the first body, covered with a gable roof, lower than the second body, are two cylindrical turrets corbelled, whose coronation (certainly a roof pepperpot) disappeared. mullioned windows appear on the floor, while simple openings, probably later, open the ground floor. The angle of the two bodies is the input, with a remarkable gateway with its sculpted decoration: after a raised porch, twisted columns ending male and female characters frame the arched door, under an entablature and a triangular pediment decorated with a carved shell. An oval oculus is located on each side of the door, then left a large carriage door in low arch with a protruding key. At one floor above, two mullioned windows. On the wall of the second body forming angle is another door in semicircular arch, topped by transom windows on both floors.