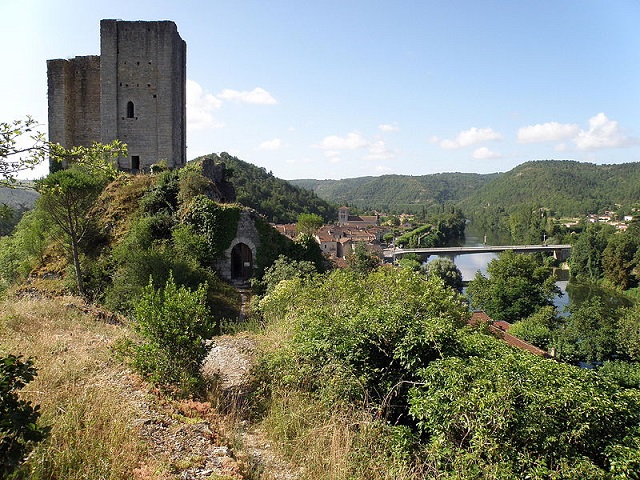 Location: Luzech, in the Meurthe-et-Moselle departement of France (Lorraine Region).
Built: 17th century.
Condition: --.
Ownership / Access: Guillaume de Cardaillac.
Notes: The castle of Luzech is a castle located in Luzech, France.The bishop of Cahors William of Cardaillac (1209-1234) imposed his power on the lower valley of the Lot following the crusade of the Albigenses by confiscating the property of the heretical lords who had supported the count of Toulouse. The bishop settled in the strongholds of Bélaye, Albas, Puy-L'Évêque and Luzech. In 1212, Simon de Montfort burned the city. In 1227, the bishop of Cahors acquired what remained of the castle of Luzech and became the eminent lord. The castle was built around 1230. It allowed the Baron de Luzech to build a second smaller castle on the rock of the Trincade, of which only a few vestiges remain. In 1257 Alphonse de Poitiers yielded to the Bishop of Cahors all the rights he had over the lands possessed by Hugues-Arnaud de Crayssac and Guillaume-Amalvin, Baron de Luzech, relieved them of the oath they owed him and their Pays tribute to the Bishop of Cahors. The barons of Luzech, who were the vassals of the Count of Toulouse, became the co-lords of Luzech with the Bishop of Cahors. Bishop Barthelemy de Roux (1250-1273) granted customs to the inhabitants of Luzech in 1270. In 1504, Bertrand de Luzech was the baron of the place. His brother, Antoine de Luzech, bishop of Cahors, ceded to him in 1505 all the rights that his church possessed in the seigniory of Cahors, but reserved the homage of the vassals of châtellenie. John II of Luzech died without children while serving in the army fighting the Protestants commanded by the Vicomte de Turenne in 1587. He left all his property to his widow, Jacquette de Ricard de Gourdon de Genouillac, Was remarried on February 23, 1604 with John IV Chapt, Count of Rastignac. The latter died at Luzech on 26 October 1621. Pierre-Jean-Julie Chapt, Marquis of Rastignac, was born in 1769. He emigrated and fought with the army of the princes. He returned to France after the dismissal of this army. He died in 1833. His daughter and heiress of the barony of Luzech is Sabine Zénaïde Chapt of Rastignac who married on 10 June 1817 with François XIV Marie Auguste Armand Émilien, Duke of La Rochefoucauld-Liancourt (17 December 1794 - 11 December 1874). In 1841, the Duke of La Rochefoucauld-Liancourt, heir of Pierre-Jean-Julie Chapt, Marquis of Rastignac, sold the castle to the commune. The building is classified as a historic monument on February 18, 1905.