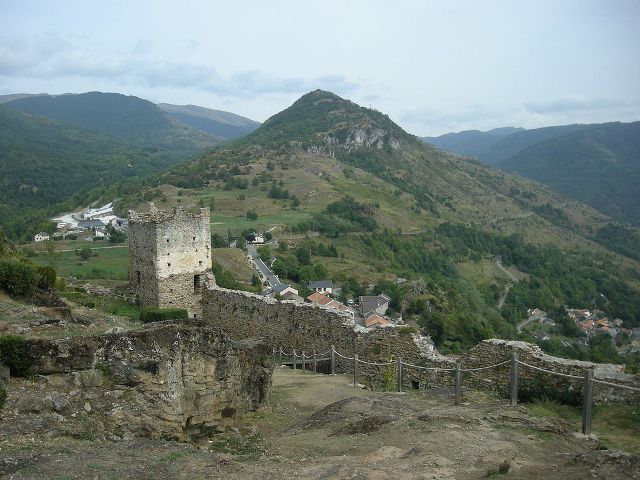 Location: Lordat, in the Ariège departement of France (Midi-Pyrenees Region).
Built: 11th century.
Condition: Ruins.
Ownership / Access: Privately owned.
ISMH Reference Number: PA00093809
Notes: Château de Lordat located on the French town of Lordat, in the department of Ariege, is one of the oldest and largest feudal castles of the County of Foix. This is a typical example of medieval military architecture of the Ariege Pyrenees.Its construction probably dates back to the ninth and tenth centuries. Lordat is mentioned for the first time in the writings in 970. In 1034, he was transferred by Bernard, Count of Carcassonne, to his younger son Roger, first Earl of Foix. Around 1244 it was occupied by the Cathars during the Albigensian crusade against. At the end of the thirteenth century, King of Aragon seizes and demand its destruction. Lordat family abandoned the castle at the time of religious wars. Dismantled on the orders of Henry IV in 1582, he will fall gradually in ruins. The entrance is protected by a square tower still retains its original appearance. Castle Lordat was listed building September 18, 1923. The work of consolidation and development has been undertaken by the community since 1999.