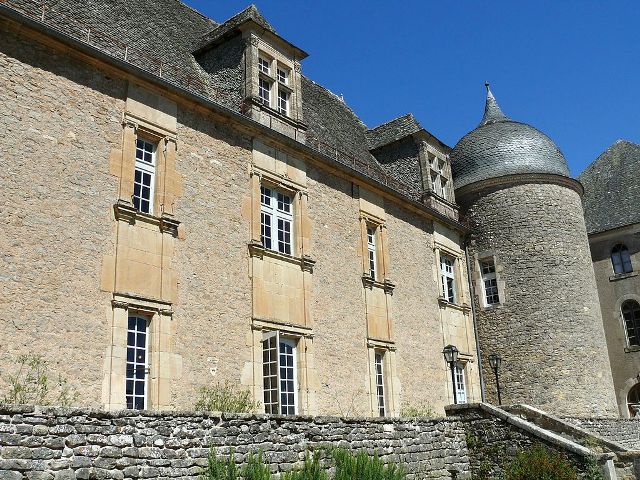 Location: Villefranche-de-Rouergue, in the Aveyron departement of France (Midi-Pyrenees Region).
Built: 16th century.
Condition: In good condition.
Ownership / Access: Privately owned.
ISMH Reference Number: PA00094203
Notes: Château de Graves is located in Graves, in the territory of Villefranche-de-Rouergue, in the department of Aveyron, in the Midi-Pyrénées region. Graves Castle was built between 1543 and 1555 by Jean Imbert Dardenne, copper rich merchant and consul of Villefranche. This quadrangular castle around a perfectly square yard of 12 m beside a decoration belonging to the Tuscan order, confined towers 7 m in diameter, has no defense. It's more of a wide open pleasure palace outward to a wealthy merchant. Castle Gages, now destroyed, the castle of Bournazel and Castle Graves are three castles that were influenced by the Renaissance architecture in the Rouergue made by the Bishop of Rodez Georges d'Armagnac and Guillaume Philandrier. The proximity of the architecture of Castle Bournazel was suppose to some historians of the nineteenth sièclequ'ils had the same architect. No documentation to confirm this hypothesis. A contract is February 4, 1554 by Jean Imbert Dardenne with the master mason William Rouergat Lissorgues. The castle was already very advanced in 1544 for William to come Lissorgues repair disorders and to build new works, "ung great ancient gate to the entrance of his house in Graves'. A contract is a mason with the same name to the construction of the college of Villefranche in 1590. A chapel, or oratory, square is on the ground floor of the northeast tower. The chapel was decorated with wall paintings in tempera on the theme of the Passion of Christ. These paintings must be later than 1562, after a Huguenot occupation of the castle. This period ended with a massacre of occupants including Jean Imbert Dardenne may have been an accomplice. For the historian Raymond Laurière, the paintings of the Passion could have been a way for Jean Imbert Dardenne reaffirm his Catholicism. The castle was classified as historical monuments November 28, 1991.