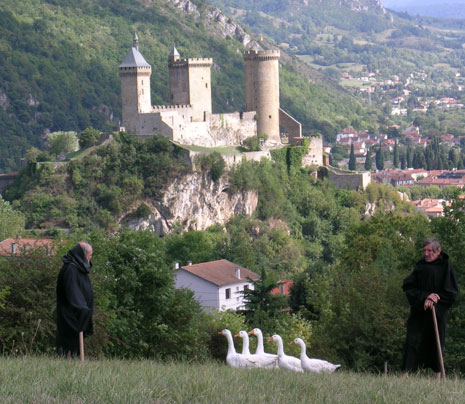 Location: Foix, in the Ariège departement of France (Midi-Pyrenees Region).
Built: 12th-19th century.
Condition: In good condition.
Ownership / Access: Owned by the department.
ISMH Reference Number: PA00093793
Notes: Château de Foix is an ancient castle, the twelfth century, whose origin seems to date back to the tenth century, rebuilt several times and much restored in the nineteenth century, which stands on the town of Foix in the department of Ariege in Languedoc-Roussillon, Midi-Pyrenees. Important place of tourism, it is renowned throughout the Ariege as landmark Cathar. It is the subject of a classification as historical monuments by the 1840 list.The castle is mentioned for the first time in a charter in the early eleventh century, it was probably built at the end of the previous century. In 1002, it appears in the will of Roger I, count of Carcassonne who bequeathed the castle to his youngest son Bernard. This is the first lord to bear the title of Count of Foix to 1012. This first castle was typically consists of a single tower, which left their bases in those of Arget and was built at the place naturally highest of the rocky outcrop. Pregnant protected the top of the rock, by marrying the closest edge of the cliffs and did little more than the raise. This allowed the monument counts to establish their authority and consolidate their presence in the region. In 1034, the castle became the chief town of Foix County and plays a decisive role in medieval military history. During the next two centuries, the castle is home of the Earls of brilliant personalities that were the soul of the Occitan resistance during the Albigensian Crusade against the county and became a favorite refuge for persecuted Cathars.

How To Get To Château de Foix (Map):