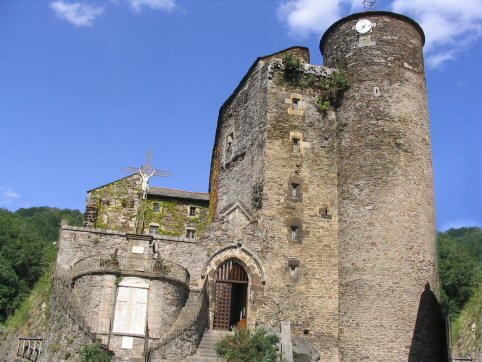 Location: Coupiac, in the Aveyron departement of France (Midi-Pyrenees Region).
Built: 13th century.
Condition: In good condition.
Ownership / Access: Privately owned.
ISMH Reference Number: PA00094003
Notes: Château de Coupiac is located in the town of Coupiac in Aveyron (France). Built in the thirteenth century and in the fifteenth century, it is formed by two wings gallows, resting directly on the rock, flanked by three powerful circular towers. Observing the three remaining towers reported some architectural differences that reflect a spread in construction. Gothic style as a whole, the castle is impressive for its size in area and height, the number of its battlements, its latrines and deadly. It also has beautiful windows in towers and large mullioned windows on the second floor. The castle visit from Easter to All Saints, all the afternoons during the Easter holidays and Toussaint late June and early September and from 10 am to 12:30 and 13:30 to 19 pm daily in July and August.

How To Get To Château de Coupiac (Map):