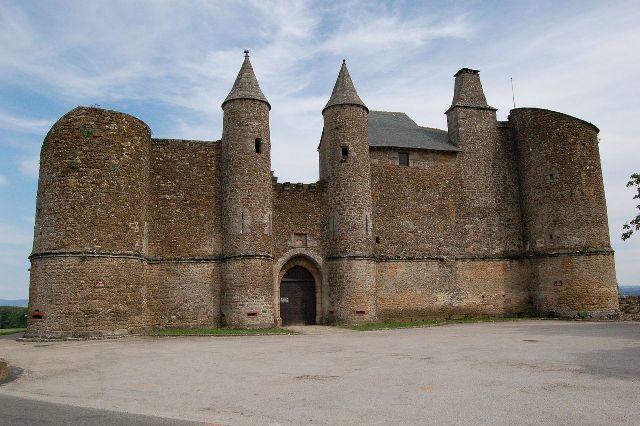 Location: Onet-le-Château, in the Aveyron departement of France (Midi-Pyrenees Region).
Built: 1518-1519.
Condition: In good condition.
Ownership / Access: Owned by the municipality.
ISMH Reference Number: PA00094095
Notes: Château d'Onet-le-Château was built in the town of Onet-le-Château in 1518-1519 to the canons of Rodez, who used it as a summer residence, while keeping views Notre Dame Cathedral of Rodez.Its history dates back to 1200: a legend tells that at the time of its construction, a dark force demolished overnight what had been built the day. This legend ended in a mysterious fire that kindled the site. The Girma brothers, suspected arsonists burned died on the place of Olmet in Rodez. Onet was given to the abbey by Bonnecombe B. Enjalbert. Then exchanged by the monks of Bonnecombe in 1292, against land belonging to the cathedral chapter. In 1360, the Dominicans Rodez recuperated some of these assets. The present building was built in 1518-1519 on the ruins of the old castle. He served summer residence and refuge during outbreaks, the canons of the cathedral chapter. Seized during the Revolution, his furniture was divided into 36 lots, and sold to 22 people for 1,328 pounds, 17 December 1792. The castle was in turn sold at auction on 5 Messidor Year IV (June 23, 1796, to Leonard Chivaille (auditor) and Anthony Chabbert (check recipient), two Ruthénois, for the modest sum of 1,800 pounds. A quote dates from 1810, indicates that the castle now belongs to the town of Onet-le-Château.