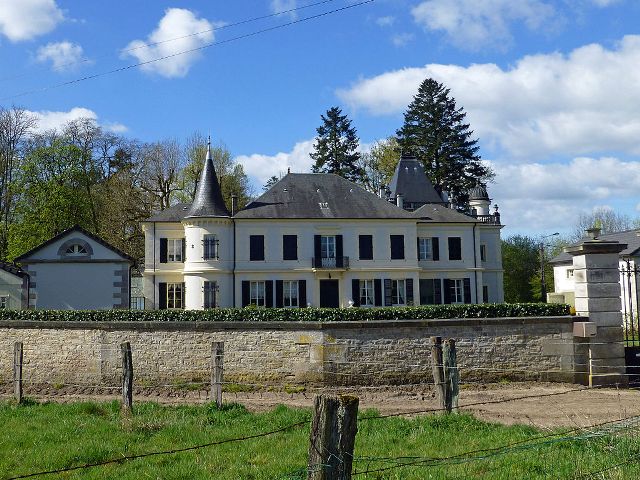 Location: Bains-les-Bains, in the Vosges departement of France (Lorraine Region).
Built: 19th century.
Condition: In good condition.
Ownership / Access: --
Notes: Le Châtelet is a mansion that looks like a small castle built in the nineteenth century the town of Bains-les-Bains in the south of the Vosges department in Lorraine. It is not to be confused with the castle Châtelet revival Harchéchamp located in the west of the same department. The property is located in a gap west balnéen, Le Châtelet, on the site of an ancient Gallic oppidum domainant the two streams of Coney and Bagnerot. It is built in the second half of the nineteenth century3 Demazure4 by Leon (1828-1905), brother of Edward Demazure who built the castle Chesnois nearby. The house then passed to several owners during the twentieth century whose Dieudonné family. It is currently subject to any registration or classification as historical monuments. Tudor style reviewed by the nineteenth century, the central wing with four sides is completed on each side by a round turret, square houses and a greenhouse. The common and the stables are built in front of the building on each side, forming a courtyard. A large park in the rear complete the architectural ensemble.

How To Get To Le Châtelet (Map):